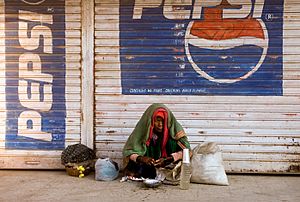 An American Pepsi Cola advertisement is a typical example for Americanisation 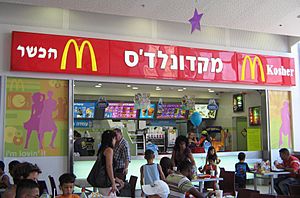 Americanisation means that a culture (often a country) is heavily influenced by so-called anglicisms. These anglicisms are American-based. Anglicisms can be institution, values, ways and behaviours, but can also be symbols and pictures.

In Americanisation, the transferring of American culture is only one-way. A culture is being Americanised, but the United States aren't affected by the other culture in return.

All content from Kiddle encyclopedia articles (including the article images and facts) can be freely used under Attribution-ShareAlike license, unless stated otherwise. Cite this article:
Americanisation Facts for Kids. Kiddle Encyclopedia.