Amity is a city in Clark County, Arkansas, United States. The population was 723 at the 2010 census. The city began on the Caddo River in the mid-19th century when William F. Browning and others, including Dr. A.B. Clingman, at various times moved to the area.

Amity was founded in 1847 by several pioneer families from the Mount Bethel area of Clark County under the leadership of William F. Browning, who served as the Clark County surveyor during the years of 1846 until his death in 1854. The group settled along the Caddo River, drawn to the area by an abundance of rich bottomland and fresh water. Browning constructed a two-story log house just west of Caney Creek, which soon became the center of the expanding community. It was Browning who gave Amity its name.

Together with other citizens, Browning formed the Caddo Valley Baptist Church of Christ, which before several other names would later develop into the Bethel Missionary Baptist Church in Glenwood and First Baptist Church in Amity. It is thought to be the first religious organization in the area, though Dr. A.B. Clingman, a physician and minister associated with the Church of Christ was in the area before Browning's group arrived. Browning's group built a large log house that would serve as both the church and the school house. The first school teacher was Captain Robert S. Burke, a former military officer and Browning's brother-in-law. A few months later, the first Amity Post Office was established nearby. 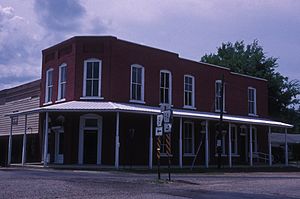 The Old Bank of Amity on the main square is listed on the National Register of Historic Places.

With the outbreak of the Civil War, the community saw dark times. Initially in support of the Confederacy, soon the community became divided, with the men of Amity leaving to fight in both the Confederate Army and the Union Army. In several cases, families were split by their loyalties, causing turmoil within the small community. Midway through the war, Union soldiers burned the Burke schoolhouse and the Browning cotton press.

Following the war's end, the center of the community shifted to a location 2 miles (3 km) south of the Caddo River, first settled by John Hays Allen and Dr. Amariah Biggs. Dr. Biggs was widely known as a physician and Methodist minister, and first settled in the area around 1850. The Amity Post Office was soon after relocated to this area. In 1870, retired army Colonel Philander Curtis, a Connecticut native, settled in the area. Curtis built the first house where the town of Amity now stands, and served for several years as the town's postmaster. In 1871, Col. Curtis and businessmen Riley Thompson and Jacob H. Lightsey purchased property from John Hays Allen, and on that property they laid out plans for the town, centering on a public square. By 1874 Amity had become a thriving village, with several new businesses and churches. In 1877 an adjacent area became "Amity Township", and in 1880 the town made a move to become incorporated, but it did not come to pass until 1907.

In the late 1870s a new schoolhouse was built. Its first teacher was Richard Melancthon Burke, son of Captain Robert Burke. The residents also formed the Amity Male and Female Academy, which eventually became Amity High School. Richard Burke died in 1883, and the school struggled until 1888, when Samual M. Samson arrived in Amity. Samson spent the next twenty years as the head of the high school, which at that time was a private school. After his departure, it was absorbed into the Amity Public School System.

In 1887, a false rumor that gold had been discovered in an area then known as the Trap Mountains resulted in a brief gold rush, which ended when the rumor proved false. Shortly after 1900, the Gurdon and Fort Smith Railroad was constructed through Amity, greatly improving the economy of the town. Soon, the logging industry began to thrive, with large sawmills opening in Rosboro and Glenwood. Amity became a main shipping and trade center for the area, and in 1905 the Bank of Amity opened, which now is on the National Register of Historic Places. In 1899 the town's first newspaper, the Amity Enterprise, went into circulation, followed by the Four-County Courier in 1915 and the Amity Owl in 1922. Just before World War II, the shortage of cinnabar caused a brief but productive mining industry in the nearby mountains south of the town, a phenomenon which became known as the Quicksilver Rush. However, any significant mining had ended by 1940, and following the war and an increased worldwide supply, the mines closed.

A.J. Hunter, who had originally come to town in 1905 to manage the city's first telephone exchange and who would later, upon the closure of the city's newspaper, begin The Owl, sold the paper in the 1940s to Marvin C. Bass of Little Rock. The paper then operated until the mid-1950s and closed, though no one remembers when or why it closed.

By 2007 Bean Lumber was struggling financially, and was under investigation for financial matters. The Amity mill closed, though the planer and treatment plants remained open. The Glenwood mill, which employed many Amity residents, closed and did not reopen until 2008. All of these events thoroughly affected the local economy, diminishing employment opportunities in the community, as well as briefly diminishing the population of the town, with many people being forced to search for work elsewhere.

In 1995, Amity School District merged with Glenwood School District to create Centerpoint High School, located midway between the two towns, in Rosboro, Pike County. The private Ouachita Hills Academy, associated with the Seventh-day Adventist Church, is located southwest of Amity on the Clark-Pike county line. Word of Faith Christian Academy is located east of town between Amity and Alpine.

The Seventh-day Adventist Church also opened Ouachita Hills College near the academy in 2003.

In 1996, Arkadelphia native Joe May, an evangelist for churches of Christ, came to Amity and founded the city's fourth newspaper, The Standard. The paper is a weekly and covers Clark and Pike counties as well as the Bismarck, Arkansas, area. In addition to publishing the newspaper, May Publishing Company puts out the Trade Days Gazette, a free-circulation paper at the monthly Amity Trade Days event. They also publish the Old Time Chronicle, a quarterly folk history magazine covering South Arkansas.

In 2007, the city observed its 100th anniversary of incorporation with a two-day festival on the square. In 2008, the city's businesspeople formed the Amity Area Chamber of Commerce.

In 2015, Russell and Kim Jones of Rosoboro started Amity Trade Days in the former Bean Lumber Company's sawmill facility, a monthly flea market in the style of Canton, TX. It attracts more than 6,000 people per month and has nearly 200 venders. It is held the first weekend (Thursday-Sunday) after the first Monday of each month.

Thornton, Billy Bob-Noted actor and director who achieved fame on "Hearts Afire" in the early 1990s and later as an award-winning director beginning with his movie Slingblade, which was based on a character he knew growing up in the Alpine community near Amity the first eight years of his life. He lived with his grandparents, Claude and Maude Faulkner at the time. He later moved to Malvern. His father is buried at the Alpine Cemetery, where he and his former wife, Angelina Jolie also have plots. Thornton donated money to construct a chapel at the cemetery.

Diffee, Agnes White - Noted Nazarene pastor, evangelist, and radio speaker. A native of Arkansas, Pastor Diffee was ordained in the Church of the Nazarene in 1919. Her first full-time ministerial work was as pastor of the Amity (Arkansas) church, where a new stone church was built and paid for under her leadership. She went on to become nationally famous for her work. (See: http://www.whwomenclergy.org/booklets/cloud_of_witnesses.php)

Franks, Dr. George R., Jr., Ph.D. - Past Grand Master of Masons in Arkansas (2004). He received the Scottish Rite 33rd Degree and many other forms of Masonic recognition. Dr. Franks was raised from childhood in Amity and attended the local public schools. He was made a Mason in the local lodge, Sulphur Springs No. 100, in 1978.

Holloway, Rufus Emory - A noted writer, his Whitman: An Interpretation in Narrative was the first biography of a major literary figure to win a Pulitzer Prize (1926). Mr. Holloway, a native of Missouri and graduate of Hendrix College, taught English for two years at Amity High School.(See: http://www.bookrags.com/biography/rufus-emory-holloway-dlb/)

Lambert, Michael L. - A longtime motorcycle racing enthusiast, he has resided in the Amity area since 1991. Originally from nearby Hot Springs, his father, Norman A. Lambert, graduated from Amity High School. Lambert held an American Motorcycle Association Professional Motocross license from 1977-1986. After retiring from professional competition, he became a race promoter and currently owns an indoor race team that competes in the AMA National Arenacross Series.

Rowe, Truett E. - Federal Bureau of Investigation special agent killed in the line of duty on June 1, 1937, during an altercation with one Guy Osborne. Rowe was born in Amity in 1904 and educated in the local schools. He joined the FBI in 1935. (See: http://www.fbi.gov/libref/hallhonor/rowe.htm)

According to the United States Census Bureau, Amity has a total area of 3.3 square miles (8.5 km2), all of it land.

There were 305 households out of which 34.4% had children under the age of 18 living with them, 56.1% were married couples living together, 9.5% had a female householder with no husband present, and 31.5% were non-families. 27.5% of all households were made up of individuals and 13.8% had someone living alone who was 65 years of age or older. The average household size was 2.50 and the average family size was 3.07.

All content from Kiddle encyclopedia articles (including the article images and facts) can be freely used under Attribution-ShareAlike license, unless stated otherwise. Cite this article:
Amity, Arkansas Facts for Kids. Kiddle Encyclopedia.