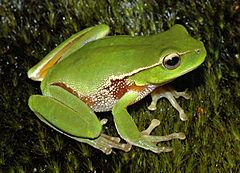 The Leaf Green Tree Frog (Litoria phyllochroa) is a species of tree frog common to forests of pasA Australia.

Amphibians of Australia are limited to members of the order Anura, commonly known as frogs. All Australian frogs are in the suborder Neobatrachia, also known as the modern frogs, which make up the largest proportion of extant frog species. About 230 of the 5,280 species of frog are native to Australia with 93% of them endemic. Compared with other continents, species diversity is low, and may be related to the climate of most of the Australian continent. There is only one invasive amphibian, the Cane Toad.

The Australian continent once formed part of the Supercontinent Pangaea, which split into Gondwana and Laurasia approximately 180 million years ago. The earliest true frog fossil, Vieraella herbsti, is dated between 188 and 213 million years old. This predates the splitting of Gondwana, and has resulted in frogs present on all continents.

Fossil data suggests the tree frogs, of the family Hylidae, originated in South America after its separation from Africa. Outside Australia, tree frogs are widespread throughout much of North and South America, Europe and Asia. Tree frogs presumably migrated to Australia via Antarctica. Similarities in melanosomes between some Litoria and Phyllomedusa suggests a relationship between the South American and Australian tree frogs, however immunological evidence suggests an early divergence between the families.

Australia and New Guinea are the two major land masses which make up the Australian continent. During its history, there have been many land connections between New Guinea and Australia. The most recent of which severed 10,000 years ago during the transition from a glacial period to the current interglacial period. The result of this recent land connection on the Australian amphibian fauna has been the swapping of species, and even families. The origin of the frog species found on both land masses can be determined by their distributions. It is likely that White's Tree Frog (Litoria caerulea) migrated from Australia to New Guinea, as it is widespread in Australia and only inhabits small areas within New Guinea. Whereas the Giant Tree Frog (Litoria infrafrenata) is likely from New Guinea, as it is widespread in New Guinea, and only inhabits the Cape York Peninsula in Australia. The single Nyctimystes species in Australia is another example of genus swapping that occurred between New Guinea and Australia.

There are two families which are widely distributed throughout the northern hemisphere which only inhabit far northern Australia. These are Microhylidae and the Ranidae. Two of the 59 genera of Microhylidae, and only one of approximately 750 species of Ranidae are native to Australia. Although both these families are widely distributed throughout the world, they have only recently reached Australia and New Guinea. This is because the Australian continent has remained isolated since its separation from Antarctica, and as it has drifted north towards Asia, many species have been able to cross into New Guinea, and eventually Australia. However, most of the ecological niches filled by frogs had been filled before the ranids and microhylids reached Australia, so only a limited number of species have established.

The distribution of Australian frogs is largely influenced by climate. The areas of largest biodiversity occur in the tropical and temperate zones of northern and eastern Australia. Arid areas have restricted amphibian biodiversity, as frogs generally require water to breed. Many Australian frog species have adapted to deal with the harsh conditions of their habitat. Many species, such as those of the genus Cyclorana, burrow underground to avoid heat and prolonged drought conditions. Tadpole and egg development of frogs from arid regions differs from those from higher rainfall regions. Some species, such as those of the Cyclorana genus and other desert dwelling species have relatively short tadpole development periods. These species often breed in temporary, shallow pools where the high water temperature speeds up tadpole development. Tadpoles that live in such pools can complete development within a month. On the other hand, species such as those in the Mixophyes genus live in areas of high rainfall. Metamorphosis of Mixophyes tadpoles may take as long as fifteen months. The Sandhill Frog (Arenophryne rotunda) lives in sand dunes between Shark Bay and Kalbarri National Park in Western Australia. This area has very little free-standing water and therefore this species has adapted another way of tadpole development. Sandhill Frogs lay their eggs under the sand and the tadpoles develop into frogs entirely within the egg. This adaptation allows them to breed with the absence of water.

There are large variety of habitats inhabited by Australian frogs. Variations in rainfall, temperature, altitude and latitude have resulted in a large number of habitats in Australia, most of which are inhabited by frogs. In the Nullarbor Plain, daytime temperatures can reach 48.5 °C nights can have freezing condition and rainfall is less than 200mm per year. These factors make it very difficult for frogs to survive, and few species are found in this area. 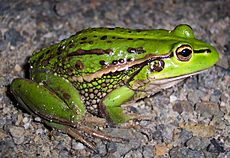 The Growling Grass Frog (Litoria raniformis) is listed as endangered because of an estimated 50% population decline over the past 10 years.

During the 1980s, population declines were reported in Australian frog species and are severe in some areas. Many of the frogs that were reported as declining were high altitude, creek dwelling species that were remote from a changing ecology. This indicated that habitat loss and degradation were not responsible for all the declines; the cause is unknown but a diseases known as chytrid fungus may be a factor.

Prior to the large scale declines of the 1980s, habitat destruction was the major threat to Australian frog species since colonisation. For example, the decline of the Giant Burrowing Frog (Heleioporus australiacus) was mostly attributed to altered land use and fire regimes, such as land clearing for housing or agriculture and high intensity fires. The distribution of the Giant Burrowing Frog included Sydney, and therefore, large populations were destroyed. 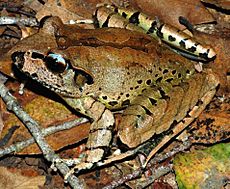 Fleay's Barred Frog (Mixophyes fleayi) is restricted to a fragmented range of less than 500km²; this species is classified as endangered. 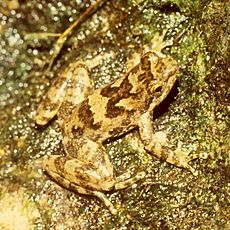 The Eungella Torrent Frog (Taudactylus eungellensis) is listed as critically endangered because of its small geographic range of 10km².

The Australian frog fauna consists of four native families, and one introduced family. The sole species of frog introduced to Australia which has naturalised, is the Cane Toad (Bufo marinus), of the family Bufonidae. The Cane Toad was introduced to several locations throughout Queensland, and has since spread west and south.

The other major family native to Australia is Myobatrachidae, consisting of 17 to 22 genera and 112 species. Myobatrachidae is endemic to Australia, New Guinea and a few small islands, however the highest diversity can be found in Australia.

Microhylidae and Ranidae make up a small amount of the Australian frog fauna, with less than 20 species in Microhylidae and one species of Ranidae. The majority of the species within these families are found throughout the world, with Australia making up a small portion of their diversity.

All numbers in the above table refer to Australian amphibians.

All content from Kiddle encyclopedia articles (including the article images and facts) can be freely used under Attribution-ShareAlike license, unless stated otherwise. Cite this article:
List of amphibians of Australia Facts for Kids. Kiddle Encyclopedia.