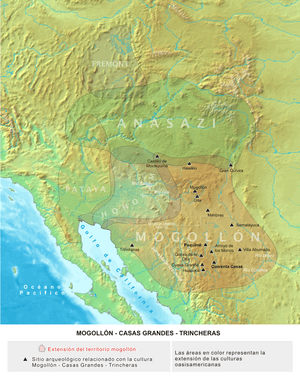 A map of ancestral Pueblo cultures

Hundreds of Ancestral Puebloan dwellings are found across the American Southwest. With almost all constructed well before 1492 CE, these Puebloan towns and villages are located throughout the geography of the Southwest.

Many of these dwellings included various defensive positions, like the high steep mesas such as at the ancient Mesa Verde complex or the present-day Acoma "Sky City" Pueblo. Earlier than 900 CE progressing past the 13th century, the population complexes appear to have been major cultural centers for the Pueblo peoples. There were also settlements scattered throughout the region of varying sizes. 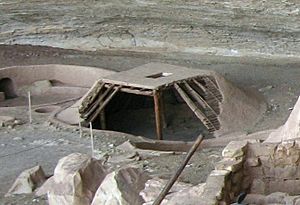 Ancestral Puebloans spanned Northern Arizona and New Mexico, Southern Colorado and Utah, and a part of Southeastern Nevada. They primarily lived north of the Patayan, Sinagua, Hohokam, Trincheras, Mogollon, and Casas Grandes cultures of the Southwest and south of the Fremont culture of the Great Basin .

There are 21 federally recognized pueblos in the United States today. Rio Grande pueblos are known as eastern Pueblos; Zuni, Hopi, and sometimes Acoma and Laguna are known as western Pueblos. 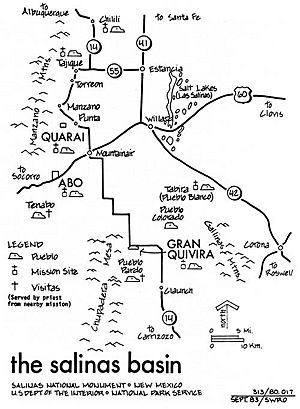 Dwellings of the Pueblo peoples in New Mexico's Salinas Basin. 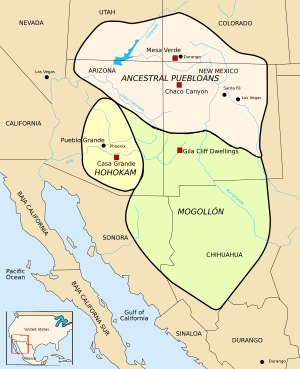 Archaeologists have agreed on three main periods of ancient occupation by Pueblo peoples throughout the Southwest called Pueblo I, Pueblo II, and Pueblo III.

The ancient population centers such as Chaco Canyon, Mesa Verde, and Bandelier for which the Ancestral Puebloans are renowned consisted of apartment-like complexes and structures made from stone, adobe mud, and other local material, or were carved into the sides of canyon walls.

The structures contained within these alcoves were mostly blocks of hard sandstone, held together and plastered with adobe mortar. Specific constructions had many similarities, but were generally unique in form due to the individual topography of different alcoves along the canyon walls.

Decorative motifs for these sandstone/mortar constructions, both cliff dwellings and otherwise, included T-shaped windows and doors. 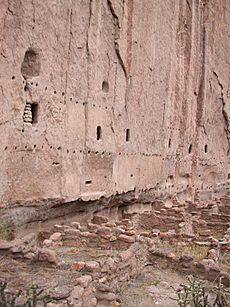 Most notable Pueblo structures were made of adobe and built like an apartment complex. Generally speaking, Pueblo buildings feature a box base, smaller box on top, and an even smaller one on top of that, with the tallest reaching four and five stories. There were floors for storage and defense, living and religious ceremonies. Generally, there were no doors on the bottom floor until recent times. This limited access to the buildings so movable ladders were key elements. One ladder would take inhabitants to the patio, or second floor, and another led through an opening through a roof and onto the first floor. Other ladders led to higher floors. 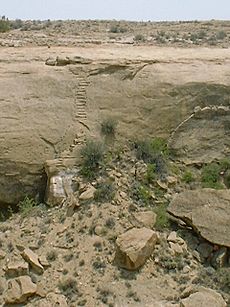 Stairs carved in a cliff face in Chaco Canyon.

The key technology of the Pueblo peoples was their irrigation techniques. These were used throughout their dwellings, and often determined the siting of communities.

Many pueblos feature T-shaped doors in adobe walls. Usually one meter wide, they are wider on top and narrower below. The Great house-style pueblos were constructed on a box system. Builders used molds to pour compacted mud without organic material. The exterior was stuccoed with sand, lime and oyster dust shells, then it was painted blue, green, or pink. Made without foundations, the walls were built from slots that were 25 centimeters deep. The doors were proportional to the size of the room. Stairs, ramps, and ladders were built to allow access to the buildings. 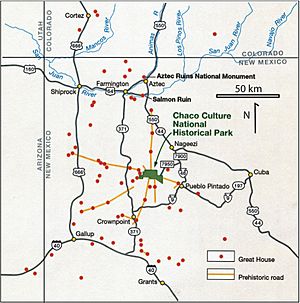 A roadmap of the Chaco Canyon culture roadways.

There are a number of consistent features surrounding the dwellings. They include water retention structures like the Mesa Verde Reservoirs, and stone towers. Each were about 60 meters long, 33 meters apart, and 2.5 meters high. In 2009 it was suggested that the shape of an oval bowl with curved sides and the uneven embankments on the long sides are unsuited for any kind of ball game; On the other hand, they appear to correspond with dance floors of the Tohono O'odham, used for Wi:gita ceremonies until at least the 1930s.

For a period of time, pueblos throughout the Southwest were connected by a network of roads that radiated from Chaco Canyon, which is believed to have been a cultural epicenter. Remnants of this roadway system are evident throughout New Mexico and Arizona today.

In addition to the movable structures used by other Native Americans across North and South America, the Pueblo peoples created distinctive structures for living, worshiping, defense, storage, and daily life.

Lists of dwellings by state

All content from Kiddle encyclopedia articles (including the article images and facts) can be freely used under Attribution-ShareAlike license, unless stated otherwise. Cite this article:
Ancestral Puebloan dwellings Facts for Kids. Kiddle Encyclopedia.