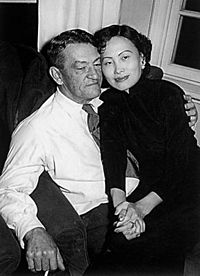 Chennault with her husband, Claire, 1950

In January 1981, Chennault visited Beijing to meet the Chinese leader Deng Xiaoping, as a private citizen, but in fact as an unofficial diplomat representing the incoming Republican president Ronald Reagan, who was due to be sworn in as president on 20 January 1981.

All content from Kiddle encyclopedia articles (including the article images and facts) can be freely used under Attribution-ShareAlike license, unless stated otherwise. Cite this article:
Anna Chennault Facts for Kids. Kiddle Encyclopedia.