Archaeology of the Channel Islands facts for kids

Archaeology is promoted in Jersey by the Société Jersiaise and by Jersey Heritage. Promotion in the Bailiwick of Guernsey being undertaken by La Société Guernesiaise, Guernsey Museums, the Alderney Society with World War II work also undertaken by Festung Guernsey.

Archaeologists in each island give regular talks on their work and summer digs in the islands usually require helpers and volunteers.

Interest in the archaeology of the islands is first recorded in the 16th century. By the 18th century articles were being published in magazines with engravings explaining interesting historic sites. 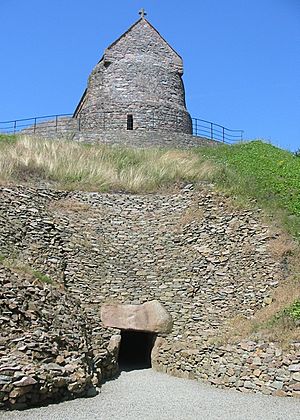 The Museum, founded in 1893 by the Société Jersiaise and its extensive Museum collections are now looked after by Jersey Heritage. Jersey Heritage, founded in 1981, is a local charity that protects and promotes the Island’s rich heritage and cultural environment.

Planning permissions may include a requirement for archaeological monitoring and/or works. In 2014, 24 planning permissions included this requirement. Jersey Heritage reach out to engage the public, for example in 2014, the Société Jersiaise held a programme of archaeological events as part of the nationwide Council for British Archaeology Festival.

Guernsey Museums holds a wide range of archaeological collections. The Museums also holds important collections of antiquarian finds, dominated by 250 prehistoric stone tools, mostly gathered together by the Lukis family mainly in the 1830s and 1840s.

Guernsey employs a States Archaeologist who undertakes excavations or who approves visiting archaeologists.

Maritime archaeology is similarly regulated and protected by laws, with displays at the Shipwreck Museum at Fort Grey and the Maritime Museum at Castle Cornet

The “Guernsey Sites and Monument Record” is compiled and maintained by the Archaeology Officer. It is a register of known archaeological sites and find spots within the Bailiwick of Guernsey, including Ancient Monuments.

Sections of early archaeological evidence on Alderney has sadly been destroyed, firstly during the Victorian era of quarrying and building fortifications and later by the German occupiers repeating the process. However the Alderney Society is thriving and has an excellent museum.

Understanding the changes to the sea level is vital when considering the early archaeology of the islands. The islands were never covered in ice, but suffered early erosion from rivers such as the Seine and Ay.

Looking at the last 20,000 years, which started with a glacial period, the sea level was around 100m lower than now, making the sea coast some 120 km west of the islands. There followed a dramatic rise, by 9,400 BC the sea had risen to come close to where it now lies, but with the islands still connected to mainland France. The separation of Alderney probably occurred first, the Guernsey/Sark landmass occurred around 9,200 BC with the Bailiwick of Guernsey becoming separate islands of Guernsey, Sark and Herm around 5,000 BC. Jersey being finally separated from the French coast about 1,000 years later, although there are traditions that a land bridge between Jersey and France lasted until finally broken in a storm or series of storms in 709 AD, the same storm separating Herm from Jethou.

The islands contain raised beaches including one 8-9m above current heights from about 130,000 years ago and evidence of a forest (in Vazon Bay, Guernsey) below the current sea levels. There are very high tides and swift currents in the Mont Saint-Michel Bay which caused additional erosion between Jersey and the French coast. 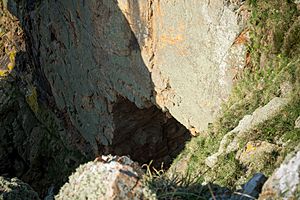 Whilst connected to mainland Europe.

14,000 BC – 12,000 BC whilst connected to mainland Europe following extinction of Neanderthals.

See also: Stone circles in the British Isles and Brittany and Neolithic Europe

The archaeological community debate whether the Neolithic Revolution was brought to the British Isles through adoption by natives, or by migrating groups of continental Europeans who settled there, however evidence of a farming lifestyle exists in Guernsey from the start of the Neolithic period, a thousand years earlier than on mainland Britain. Sites excavated include: 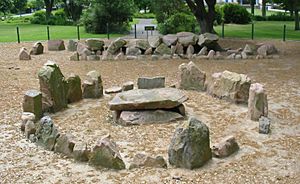 Alderney has a cist, or burial chamber named Roc à l’Epine dating from 4,000 BC. On Sark, there is a terraced area that dates from the late Stone Age (c.2,400 BC). Herm contains at least eight known visible tombs with another seven suspected. Jethou has a menhir. 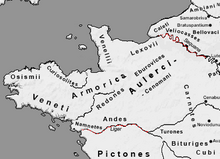 Map of the Gallic people in Western Gaul. Baiocasses between Lexovii and Unelli are not mentioned

The Roman name for the Channel Islands was I. Lenuri (Lenur Islands) and is included in the Peutinger Table 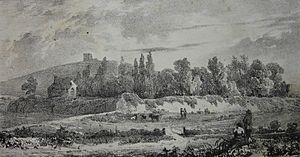 The wealth of the Dukes of Normandy and the Norman church is demonstrated in the number of building works. There are also a number of surviving written documents dating from this period.

A 1651 depiction of Elizabeth Castle

All content from Kiddle encyclopedia articles (including the article images and facts) can be freely used under Attribution-ShareAlike license, unless stated otherwise. Cite this article:
Archaeology of the Channel Islands Facts for Kids. Kiddle Encyclopedia.