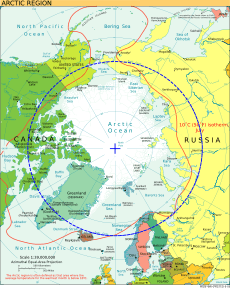 Map of the Arctic region, Alaska is in the upper left side, the Arctic Circle is shown in blue. 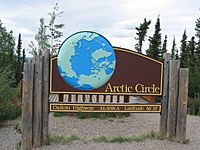 Arctic Alaska or Far North Alaska is a region of the U.S. state of Alaska generally referring to the northern areas on or close to the Arctic Ocean.

It commonly includes North Slope Borough, Northwest Arctic Borough, Nome Census Area, and is sometimes taken to include parts of the Yukon-Koyukuk Census Area. Some notable towns there include Prudhoe Bay, Barrow, Kotzebue, Nome, and Galena.

Most of these communities have no highways and can only be reached by aircraft or snowmobile in good weather. Originally inhabited by various Alaska Native groups living off hunting, whaling, or salmon fishing, modern settlement in Arctic Alaska was driven first by discoveries of gold and later on by the extraction of petroleum.

The ecosystem consists largely of tundra covering mountain ranges and coastal plains which are home to bears, wolves, sheep, oxen, reindeer, and numerous species of birds, indeed the north coast has been defined as the Arctic coastal tundra ecoregion. Arctic Alaska is also the location of the Arctic National Wildlife Refuge, Gates of the Arctic National Park and Preserve, and the National Petroleum Reserve-Alaska. The Arctic experiences midnight sun in the summer and polar night in the winter.

All content from Kiddle encyclopedia articles (including the article images and facts) can be freely used under Attribution-ShareAlike license, unless stated otherwise. Cite this article:
Arctic Alaska Facts for Kids. Kiddle Encyclopedia.