Arthropods (phylum or superphylum Arthropoda, Greek language for "joint-legged") are a large group of invertebrates, which means they do not have backbones (vertebrae). Insects, spiders, crabs, shrimp, millipedes, and centipedes are all arthropods. Arthropods have jointed feet, a segmented body, and an exoskeleton, a cuticle on the outside of their body.

Arthropods have by far the greatest number of species of any animal group, at around 900,000 species. One single order of insects – the beetles – outnumber all others.

"Insects are the most diverse organisms in the history of life".

The other notable fact is that the arthropods are mostly terrestrial in their habitat. They are the only invertebrate phylum of which this is true. Helping them in this respect is their hard exoskeleton, which reduces the loss of water (dessication). They are also notable as the first phylum to develop genuine flight.

Arthropods are made up of four groups of living animals and one group of extinct animals. The four groups are insects, arachnids, crustaceans, and myriapods. The trilobites are extinct, and they are the second most famous type of fossils, after the dinosaurs.

Arthropods are a source of food for many animals, including humans.

Arthropods are invertebrates with segmented bodies and jointed limbs. The limbs form part of an exoskeleton, which is mainly made of α-chitin, a derivative of glucose. In addition to these characteristics, arthropods are separated from other invertebrates by their being bilaterally symmetrical and possessing a dorsal brain with a ventral nerve cord. One other group of animals, the tetrapods, has jointed limbs, but tetrapods are vertebrates and therefore have endoskeletons.

One estimate indicates that arthropods have 1,170,000 described species, and account for over 80% of all known living animal species. Another study estimates that there are between 5 to 10 million extant arthropod species, both described and yet to be described. Estimating the total number of living species is extremely difficult because it often depends on a series of assumptions in order to scale up from counts at specific locations to estimates for the whole world. A study in 1992 estimated that there were 500,000 species of animals and plants in Costa Rica alone, of which 365,000 were arthropods.

They are important members of marine, freshwater, land and air ecosystems, and are one of only two major animal groups that have adapted to life in dry environments; the other is amniotes, whose living members are reptiles, birds and mammals. One arthropod sub-group, insects, is the most species-rich member of all ecological guilds (ways of making a living) in land and fresh-water environments. The lightest insects weigh less than 25 micrograms (millionths of a gram), while the heaviest weigh over 70 grams (2.5 oz). Some living crustaceans are much larger, for example the legs of the Japanese spider crab may span up to 4 metres (13 ft).

Arthropod exoskeletons are made of cuticle, a non-cellular material secreted by the epidermis. Their cuticles vary in the details of their structure, but generally consist of three main layers: the epicuticle, a thin outer waxy coat that moisture-proofs the other layers and gives them some protection; the exocuticle, which consists of chitin and chemically hardened proteins; and the endocuticle, which consists of chitin and unhardened proteins. The exocuticle and endocuticle together are known as the procuticle. Each body segment and limb section is encased in hardened cuticle. The joints between body segments and between limb sections are covered by flexible cuticle.

The exoskeletons of most aquatic crustaceans are biomineralized with calcium carbonate extracted from the water. Some terrestrial crustaceans have developed means of storing the mineral, since on land they cannot rely on a steady supply of dissolved calcium carbonate. Biomineralization generally affects the exocuticle and the outer part of the endocuticle. Two recent hypotheses about the evolution of biomineralization in arthropods and other groups of animals propose that it provides tougher defensive armor, and that it allows animals to grow larger and stronger by providing more rigid skeletons; and in either case a mineral-organic composite exoskeleton is cheaper to build than an all-organic one of comparable strength.

The cuticle can have setae (bristles) growing from special cells in the epidermis. Setae are as varied in form and function as appendages. For example, they are often used as sensors to detect air or water currents, or contact with objects; aquatic arthropods use feather-like setae to increase the surface area of swimming appendages and to filter food particles out of water; aquatic insects, which are air-breathers, use thick felt-like coats of setae to trap air, extending the time they can spend under water; heavy, rigid setae serve as defensive spines.

Although all arthropods use muscles attached to the inside of the exoskeleton to flex their limbs, some still use hydraulic pressure to extend them, a system inherited from their pre-arthropod ancestors; for example, all spiders extend their legs hydraulically and can generate pressures up to eight times their resting level. 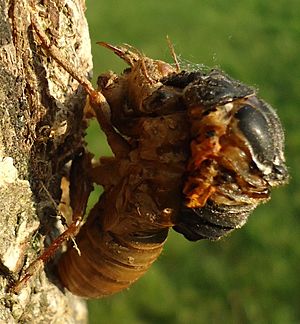 Cicada climbing out of its exoskeleton while attached to tree

The exoskeleton cannot stretch and thus restricts growth. Arthropods therefore replace their exoskeletons by molting, or shedding the old exoskeleton after growing a new one that is not yet hardened. Molting cycles run nearly continuously until an arthropod reaches full size.

In the initial phase of molting, the animal stops feeding and its epidermis releases molting fluid, a mixture of enzymes that digests the endocuticle and thus detaches the old cuticle. This phase begins when the epidermis has secreted a new epicuticle to protect it from the enzymes, and the epidermis secretes the new exocuticle while the old cuticle is detaching. When this stage is complete, the animal makes its body swell by taking in a large quantity of water or air, and this makes the old cuticle split along predefined weaknesses where the old exocuticle was thinnest. It commonly takes several minutes for the animal to struggle out of the old cuticle. At this point the new one is wrinkled and so soft that the animal cannot support itself and finds it very difficult to move, and the new endocuticle has not yet formed. The animal continues to pump itself up to stretch the new cuticle as much as possible, then hardens the new exocuticle and eliminates the excess air or water. By the end of this phase the new endocuticle has formed. Many arthropods then eat the discarded cuticle to reclaim its materials.

Because arthropods are unprotected and nearly immobilized until the new cuticle has hardened, they are in danger both of being trapped in the old cuticle and of being attacked by predators. Molting may be responsible for 80 to 90% of all arthropod deaths.

The stiff cuticles of arthropods would block out information about the outside world, except that they are penetrated by many sensors or connections from sensors to the nervous system. In fact, arthropods have modified their cuticles into elaborate arrays of sensors. Various touch sensors, mostly setae, respond to different levels of force, from strong contact to very weak air currents. Chemical sensors provide equivalents of taste and smell, often by means of setae. Pressure sensors often take the form of membranes that function as eardrums, but are connected directly to nerves rather than to auditory ossicles. The antennae of most hexapods include sensor packages that monitor humidity, moisture and temperature.

Head of a wasp with three ocelli (centre), and compound eyes at the left and right

Most arthropods have sophisticated visual systems that include one or more usually both of compound eyes and pigment-cup ocelli ("little eyes"). In most cases ocelli are only capable of detecting the direction from which light is coming, using the shadow cast by the walls of the cup. However the main eyes of spiders are pigment-cup ocelli that are capable of forming images, and those of jumping spiders can rotate to track prey.

Compound eyes consist of fifteen to several thousand independent ommatidia, columns that are usually hexagonal in cross section. Each ommatidium is an independent sensor, with its own light-sensitive cells and often with its own lens and cornea. Compound eyes have a wide field of view, and can detect fast movement and, in some cases, the polarization of light. On the other hand the relatively large size of ommatidia makes the images rather coarse, and compound eyes are shorter-sighted than those of birds and mammals – although this is not a severe disadvantage, as objects and events within 20 centimetres (7.9 in) are most important to most arthropods. Several arthropods have color vision, and that of some insects has been studied in detail; for example, the ommatidia of bees contain receptors for both green and ultra-violet.

Most arthropods lack balance and acceleration sensors, and rely on their eyes to tell them which way is up. The self-righting behavior of cockroaches is triggered when pressure sensors on the underside of the feet report no pressure. However many malacostracan crustaceans have statocysts, which provide the same sort of information as the balance and motion sensors of the vertebrate inner ear.

The proprioceptors of arthropods, sensors that report the force exerted by muscles and the degree of bending in the body and joints, are well understood. However, little is known about what other internal sensors arthropods may have.

A few arthropods, such as barnacles, are hermaphroditic, that is, each can have the organs of both sexes. However, individuals of most species remain of one sex all their lives. A few species of insects and crustaceans can reproduce by parthenogenesis, for example, without mating, especially if conditions favor a "population explosion". However most arthropods rely on sexual reproduction, and parthenogenetic species often revert to sexual reproduction when conditions become less favorable. Aquatic arthropods may breed by external fertilization, as for example frogs also do, or by internal fertilization, where the ova remain in the female's body and the sperm must somehow be inserted. All known terrestrial arthropods use internal fertilization, as unprotected sperm and ova would not survive long in these environments. In a few cases the sperm transfer is direct from the male's penis to the female's oviduct, but it is more often indirect. Some crustaceans and spiders use modified appendages to transfer the sperm to the female. On the other hand, many male terrestrial arthropods produce spermatophores, waterproof packets of sperm, which the females take into their bodies. A few such species rely on females to find spermatophores that have already been deposited on the ground, but in most cases males only deposit spermatophores when complex courtship rituals look likely to be successful.

The nauplius larva of a prawn

Most arthropods lay eggs, but scorpions are viviparous: they produce live young after the eggs have hatched inside the mother, and are noted for prolonged maternal care. Newly born arthropods have diverse forms, and insects alone cover the range of extremes. Some hatch as apparently miniature adults (direct development), and in some cases, such as silverfish, the hatchlings do not feed and may be helpless until after their first molt. Many insects hatch as grubs or caterpillars, which do not have segmented limbs or hardened cuticles, and metamorphose into adult forms by entering an inactive phase in which the larval tissues are broken down and re-used to build the adult body. Dragonfly larvae have the typical cuticles and jointed limbs of arthropods but are flightless water-breathers with extendable jaws. Crustaceans commonly hatch as tiny nauplius larvae that have only three segments and pairs of appendages.

All content from Kiddle encyclopedia articles (including the article images and facts) can be freely used under Attribution-ShareAlike license, unless stated otherwise. Cite this article:
Arthropod Facts for Kids. Kiddle Encyclopedia.