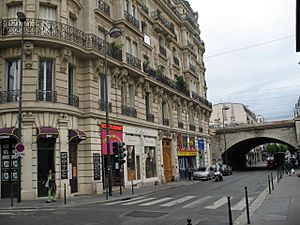 Asnières-sur-Seine is a town in France near Paris. It is in the region Île-de-France and the department Hauts-de-Seine. About 76,000 people live there. It is one of the most densely populated municipalities in Europe (its density is 17,178/km²).

Asnières-sur-Seine used to just be called Asnières. The name Asnières was first mentionned in 1158 as Asnerias, from Medieval Latin asinaria, meaning "donkey farm". The soil of Asnières was poor, where heather grew in Medieval times, was probably only good enough for breeding donkeys.

All content from Kiddle encyclopedia articles (including the article images and facts) can be freely used under Attribution-ShareAlike license, unless stated otherwise. Cite this article:
Asnières-sur-Seine Facts for Kids. Kiddle Encyclopedia.