Parliament of Australia facts for kids 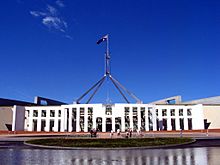 The Parliament of Australia is the federal governing system in Australia. It was formed on May 9, 1901. The parliament is bicameral, which means it has two houses, the House of Representatives and the Senate. It was copied mainly from the way the United Kingdom's Parliament was run, the Westminster system, but it also has some ideas from the United States Congress. The laws which control the way the parliament is set up and its powers are part of the Australian Constitution. The Parliament meets in a special building, Parliament House, in Canberra.

The parliament has four main functions:

The Australian Parliament first met in the Royal Exhibition Building in Melbourne in 1901. It then took over the Victorian Parliament in Melbourne until it moved to Canberra in 1927. A new building for the Parliament was finished in 1988 to celebrate 200 years of European settlement in Australia.

The government is formed by the political party (or group of political parties) who have the most members in the House. The House is set out in the British style, even using the green colours of the House of Commons. The Speaker sits at the front; the members of the government sit on the seats to his right, and the opposition sits on the seats to his left. The Prime Minister, the Leader of the Opposition, government ministers, and the shadow ministers, sit at a large table in the centre.

The Senate is the upper house of the Australian Parliament. There are 76 members in the Senate. There are 12 senators for each Australian state, and 2 for each territory. The Senate makes and changes legislation. To become law, legislation must be passed by both houses and then be signed by the Governor-General.

The colours in the Australian Senate are red, as in the British House of Lords. The senators sit in a U shape around a central table. The head of the Senate, known as the President, sits at the head of the table. On his right are the government senators, and on his left the opposition. Senators from minor political parties and Independent senators sit at the bottom of the U shape.

All content from Kiddle encyclopedia articles (including the article images and facts) can be freely used under Attribution-ShareAlike license, unless stated otherwise. Cite this article:
Parliament of Australia Facts for Kids. Kiddle Encyclopedia.