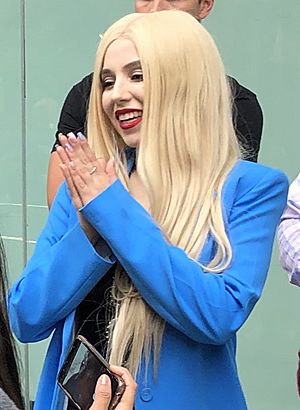 Amanda Ava Kochi (born 16 February 1994), better known by her stage name Ava Max, is an American singer. She shot to prominence with her single "Sweet but Psycho" which was her breakthrough hit and became a big song. She has released other singles such as "So Am I" and "Torn". "Sweet but Pyscho" charted at number 15 on the Sweden Sverigetopplistan. She performed pop.

All content from Kiddle encyclopedia articles (including the article images and facts) can be freely used under Attribution-ShareAlike license, unless stated otherwise. Cite this article:
Ava Max Facts for Kids. Kiddle Encyclopedia.