Barahona is a Dominican province. It is in the southwestern part of the country. Its capital city is Santa Cruz de Barahona.

It was created as a Maritime District, an old category given to some regions along the coast, on 12 September 1881. The Dominican Constitution of 1907 changed the Maritime Districts to provinces.

The province takes the name from its capital city, Santa Cruz de Barahona. Barahona is a Spanish last name, and it seems that a Spanish colonist with that name lived in the area.

Barahona is bordered to the northwest by the province of Baoruco, to the northeast by Azua, to the west by the Independencia province. The Pedernales province is to the southwest and south of Barahona and the Caribbean Sea is to the east.

The province was part of the old Azua. It was created as a Maritime District on 12 September 1881 with the municipalities of Santa Cruz de Barahona, Cabral, Duvergé, Enriquillo and Neiba. Its category was changed to province by the Dominican Constitution of 1907.

Two new provinces were created from the original province of Barahona. The Baoruco Province was created in 1943 and then the Pedernales Province in 1957.

Its population represents 1.98% of the total population of the country and the province is ranked as the 14th (out of 31 plus the National District) more populated province.

As of 2016[update], the total estimated propulation of the province is 188,820 inhabitants.

The largest city of the province is Santa Cruz de Barahona, its head municipality or capital, with a population (in 2010) of 62,054 inhabitants.

The eastern part of Sierra de Neiba is in the northwest of the province and the Sierra Martín García is the limit with the Azua Province, in the northeast.

The valley of the river Yaque del Sur is an important farming centre in the southwest because people here uses the water of the river to grow different crops, mainly plantain and sugar cane. The Rincón lake is in this valley; fishing is an important activity in this lake. 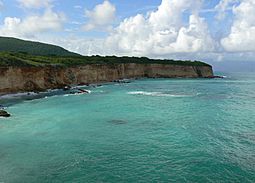 The most important river of the province is Yaque del Sur. Other rivers are Nizaíto (23 km long) and Bahoruco (14 km). The river San Rafael is only 3 km long but many persons go there during summer to enjoy its cool waters and part of its water is taken to the city of Barahona.

There are three important roads in the province, and they get to the border with Haiti. One of them goes through the province from north to south and gets to Pedernales after crossing the Sierra de Bahoruco by the coast.

The other two roads get to Jimaní; they go around the Lake Enriquillo, one by the northern side and the other by the southern side of the lake.

The main economic activity of the province is agriculture; the main products are coffee in the mountains and plantain and sugar cane in the valley of the river Yaque del Sur.

Other important economic activities are industry (sugar and textiles) in Santa Cruz de Barahona and fishing along the Caribbean coast.

All content from Kiddle encyclopedia articles (including the article images and facts) can be freely used under Attribution-ShareAlike license, unless stated otherwise. Cite this article:
Barahona Province Facts for Kids. Kiddle Encyclopedia.