Barnsdale, or Barnsdale Forest, is an area of South Yorkshire, England. The area falls within the Whitley Ward of the Wakefield Metropolitan Council. Barnsdale is historically part of the West Riding of Yorkshire. Barnsdale lies in the immediate vicinity north and northwest of Doncaster, and which was formerly forested and a place of royal hunts, and also renowned as a haunt of the outlaw Robin Hood in early ballads.

Boundaries and features of Barnsdale

Barnsdale historically falls within the West Riding of Yorkshire.

The area was once thick woodland, rich with game and deer; and the monarchs of England are sometimes recorded as having gone on royal hunts in the Barnsdale forest. It is believed that at some point in the early medieval era, Barnsdale Forest was probably huge and may have covered most of South Yorkshire (in the same manner as Sherwood Forest probably once covered most of Nottinghamshire). It is possible that the large town of Barnsley, some 10 miles (16 km) to the west of Hampole, got its name from the forest.

Barnsdale Bar is the site of the junction of the A1 (the historic Great North Road), the A639, and Wrangbrook Lane, Woodfield Road and Long Lane (junction 38 of the A1). Now a service area lies just north of the junction, about eight miles north-northwest of Doncaster. Three limestone quarries exist nearby, and archeological digs at the site have turned up some fascinating materials, architecture, and preserved farmland dating back to the medieval era, the Dark Ages, and beyond. 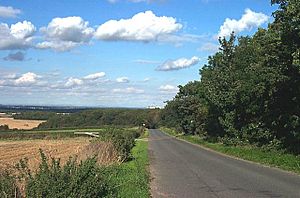 At Barnsdale Bar there is a 1,226 yard railway tunnel which, although closed to passenger traffic in 1932 and completely closed in 1959, is in remarkable condition and is part of the former Hull and Barnsley Railway.

Connections between the Barnsdale area and the Robin Hood legend 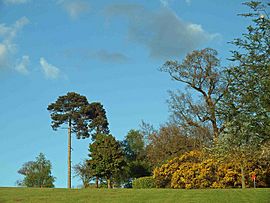 In the earliest medieval ballads of Robin Hood, which date from the fifteenth century, the outlaw is stated as having made Barnsdale Forest his abode and base of operations (for example, in "Robin Hood and Guy of Gisbourne", and in "A Gest of Robyn Hode"). Notable locations within the forest of Barnsdale which are directly related to the Robin Hood legend include the villages of Wentbridge and Campsall.

There is also Robin Hood's Well, a small monument (apparently designed by John Vanbrugh) lying right next to the A1 between the Red House junction and Barnsdale Bar, in between the villages of Skelbrooke and Burghwallis. However, it was moved around 1960 when the junction was being constructed, so the real well is actually beneath the A1.

Yet another well - Little John's Well - lies to the west of Hampole, between Wrangbrook and Skelbrooke (but closer to the latter). It is also called Little John's Cave. Situated by the A638, to the west of Barnsdale, it was once engraved with the outlaw's name, but is now derelict.

A feature of modern-day Barnsdale is the model village of Woodlands which lies about 4 miles south of Barnsdale Bar between the Roman Road and the historic Great North Road, here numbered as the A638 following the construction in 1960 of the A1(M) Doncaster by-pass.

All content from Kiddle encyclopedia articles (including the article images and facts) can be freely used under Attribution-ShareAlike license, unless stated otherwise. Cite this article:
Barnsdale Facts for Kids. Kiddle Encyclopedia.