Barranquitas ( Smallgullies) is a small mountain municipality located in the central region of Puerto Rico, south of Corozal and Naranjito; north of Coamo and Aibonito; west of Comerío and Cidra; and east of Orocovis. Barranquitas is spread over 6 wards and Barranquitas Pueblo (the downtown area and the administrative center of the city). It is part of the San Juan-Caguas-Guaynabo Metropolitan Statistical Area.

Barranquitas is about one hour by winding roads from San Juan, the capital. It is nestled amid hills and mountains, and nearby, between Barranquitas and Aibonito, is located the "cañón de San Cristóbal" (Canyon of Saint Cristopher); one of the deepest canyons in the Indies. For years, the overlook was used as a municipal garbage; in the last decade, the refuse was removed and the site restored.

Barranquitas's local Taino Indian Cacique (Chief) was called Orocobix and his yucayeque or tribe was known as the Jatibonicu Taino.

The town was founded in 1803 by Antonio Aponte Ramos.

Early in the 20th century, Barranquitas residents, known as Barranquiteños, had a short but legendary territory war with residents of the city of Comerío.

The Municipality of Barranquitas sits on the middle of the Cordillera Central of Puerto Rico, which is the main mountain range that crosses the island from west to east. It is bordered by the municipalities of Corozal, Naranjito, Coamo, Aibonito, Orocovis, and Comerío. Barranquitas has a surface area of 34 square miles (88.4 km2).

The terrain is mostly mountainous. Some of the peaks found in the municipality are La Torrecilla and Farallón. Barranquitas is also the site of the San Cristóbal Canyon.

The municipality of Barranquitas is divided into eight barrios.

Other known places of interest in Barranquitas are the San Cristóbal Canyon, and the ruins of Hacienda Margarita. El Cortijo Castle is an old, historical structure, which is currently a museum. Also, Camp Morton is a popular spot for activities and retirements. 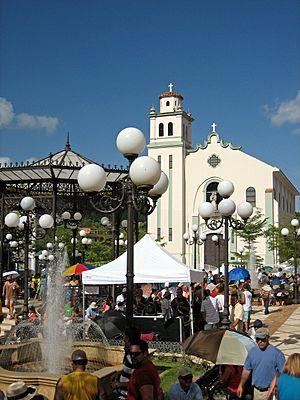 Among the annual festivities celebrated in Barranquitas are: The Festival del Apio (The Apio Festival. Apio)held in April. The apio(from the legume Apios tuberosa / Apios americana) is a plant considered in the family of the celery. The Festival de la Vega, held in May. Another one is the festivity in honor of Saint Anthony of Padua, the town's patron saint, are held in June. The most famous festival is the annual Artisans Fair, the oldest one in the island, with over 50 years, and it's held on mid July.

Barranquitas has no professional sports teams, but there are some amateur sports teams based in the city. The most popular amateur sport is baseball. The team of Barranquitas is known as the "Proceres" (is an adjective for an important person in history)due to the fact that the town has been the birthplace for many historical figures. The other popular sport is the volleyball.

Among Puerto Ricans on the island, people born in Barranquitas are known to be "good looking" . Most of the Puerto Ricans born in the town are known to have light-colored eyes and have strong European features. Some also have an apparent mestizo look to them. The reason for this phenomenon is due to the migration of many Taino Indians during the Spanish colonization. Many Tainos fled to the mountainous region to escape slavery. Many poor Spanish and other European immigrants moved to this region as well and settled as coffee growers. Eventually, the Taino and European immigrants intermarried and created what is called the "mestizo".

All content from Kiddle encyclopedia articles (including the article images and facts) can be freely used under Attribution-ShareAlike license, unless stated otherwise. Cite this article:
Barranquitas, Puerto Rico Facts for Kids. Kiddle Encyclopedia.