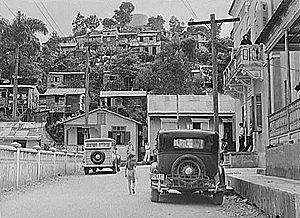 Orocovis (from Taino language, Orocobix popularly thought to mean "remembrance of the first mountain") is a town and municipality of Puerto Rico located in the Central Mountain Range, north of Villalba and Coamo; south of Morovis and Corozal; southeast of Ciales; east of Jayuya; and west of Barranquitas. Orocovis is spread over 17 barrios and Orocovis Pueblo (the downtown area and the administrative center of the city). It is part of the San Juan-Caguas-Guaynabo Metropolitan Statistical Area.

Since before the Spanish colonization in the 16th century, Taíno Indians were already established in the Orocovis region. They were led by the cacique Orocobix and his group of Taino was known as the Jatibonicu. After Spaniards settled in the island, the region was called Barros and designated as a barrio of Barranquitas.

On May 25, 1825, the neighbors of the region granted Don Juan de Rivera Santiago the powers to request the Governor authorization to found a municipality in Barros, where they had bought almost 14 acres of land from Doña Eulalia de Rivera, who donated an additional acre to establish several municipal works. However, due to the distance from bodies of water, the settlement was moved to another place. On November 10, 1825, Governor Miguel de la Torre granted permission to found the new municipality of Barros.

In 1838, the parish of San Juan Bautista de Barros was created and was blessed and inaugurated on October 29 of the same year. However, on 1875, a fire destroyed the church, the King's House, the priest's house and several homes.

In 1928, the Legislative Assembly of Puerto Rico approved a resolution to change the name of Barros to Orocovis, to honor the Taíno cacique of the same name, who lived in that region.

Over the blue portion there's an oval with a sun. The sun has seventeen rays that represent the different regions of the town. The sun, being the center of our solar system, represents Orocovis as the center of the island of Puerto Rico.

Most of the Orocovis terrain runs through the Cordillera Central of the island. Most of the high peaks are in the southern region of the town within the limits of the municipality with Villalba and Coamo. The highest peak of the town is Cerro Mogote.

The rivers Toro Negro, Sana Muertos, Orocovis, Matrullas, and Bauta, and the creeks Doña Juana, Palmar and Cacaos are among the water bodies in the town. There are two lakes: El Guineo, formed within de Toro Negro River, and the Matrullas Lake formed by the Bauta River. El Guineo is Puerto Rico's highest lake.

The municipality of Orocovis is itself sub-divided into several barrios (wards/districts):

"The Musical Capital of Puerto Rico" 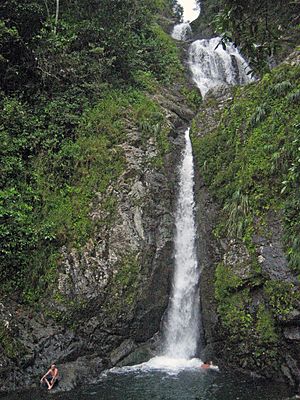 Orocovis Fiestas Patronales are held in June. Other traditional festivals held at the city are the Infant Theater Festival in April; the Festival del Camarón in July; the Arts Craft Fair in September; and the National Festival of the Puerto Rican Pastel in November.

According to the 2000 census, Orocovis has a population of 23,844 with a population density is 378.4 people per square mile (145.5/km2). Although there was a decline in the population during the 1980s, it has steadily increased during the last decades.

There are 17 bridges in Orocovis.

Cattle, coffee, fruits, tobacco, and wheat. A young business growing hydroponics lettuce was in negotiations to be a supplier for Walmart in 2019.

Orocovis has several public and private schools and public education is administered by the Puerto Rico Department of Education.

All content from Kiddle encyclopedia articles (including the article images and facts) can be freely used under Attribution-ShareAlike license, unless stated otherwise. Cite this article:
Orocovis, Puerto Rico Facts for Kids. Kiddle Encyclopedia.