The Battle of Falling Waters (July 6, 1863 – July 16, 1863), also called the Battle of Williamsport and the Battle of Hagerstown, was fought as part of the Gettysburg Campaign during the American Civil War. It was an inconclusive battle in that it did not end in a clear victory for either side. Having been defeated at the Battle of Gettysburg, General Robert E. Lee's army retreated along the Fairfield Road toward Hagerstown and Williamsport, Maryland. Blocked from escaping into Virginia by the flooded Potomac River, Lee's forces created a defensive line with their backs to the river. The Union army was cautiously following Lee and arrived in the area beginning on July 12. There were a number of skirmishes and heavy fighting on July 13. That evening the river was low enough and Lee's army began crossing into Virginia. On July 14, Union cavalry attacked the Confederate rearguard taking about 700 prisoners.

By late 1862, Virginia was running out of food to feed its army. Lee's horses were dying of disease because they had little or no fodder. The cavalry and artillery units had to be widely scattered behind his lines in order to find food for the horses. In the winter of 1863, food trains from the south were becoming more and more scarce. His men were living on rations of one-quarter pound of salted meat per day. Confederate President Jefferson Davis and his Secretary of War James Seddon wanted to send detachments from Lee's army to other more successful war fronts. Lee was opposed to the idea. Because of increased activity by the Union Army of the Potomac recently, he could not afford to weaken his army any further.

In June 1863, Lee launched his most ambitious plan of the war. He and his Army of Northern Virginia invaded the North for a second time. His first invasion ended at the Battle of Antietam in September 1862. This time he wanted to take the war out of Virginia and bring it into the Northern states. Virginia had been ravaged by war and Lee's army could no longer find food and supplies. He also wanted to defeat the Army of the Potomac on its own soil. This would demoralize the North and possibly bring an end to the war. However, his defeat at the Battle of Gettysburg ended heavy losses. The south lost 22,198 soldiers (killed, wounded, captured or missing).{{efn|Confederate casualty numbers are usually imperfect. In this case, an number closer to 28,000 is probably more correct. Both Union and Confederate governments were very poor record keepers. Many if not most Confederate records were destroyed by the end of the war. 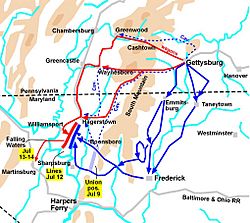 On July 4, 1863, following three days of battle at Gettysburg, the two armies watched each other from opposing ridges. The Union commander, General George G. Meade, sent out skirmishers to probe the Confederate lines. But no order was given to attack. Mead knew the Confederates would be hard to dislodge from a defensive position. The Confederate army would probably have welcomed an attack so as to repay their terrible losses they suffered the day before. But Lee's main concern was getting his army and their captured supplies back to Virginia. Lee knew it was extremely dangerous to retreat in front of an enemy army. Lee gave detailed instructions on how the retreat would be accomplished. The Confederate Army of Northern Virginia was to hold its position on Seminary Ridge all day on July 4th. The more than 10,000 wounded men would be moved by wagon train 40 miles (64 km) to Williamsport and cross the Potomac to Virginia.

Confederate General John D. Imboden's cavalry brigade arrived at Gettysburg on July 3, too late to take part in the battle. Because his cavalry unit was fresh, Lee assigned Imboden the task of escorting and protecting the wagon train of wounded soldiers back to Virginia. Under cover of a heavy rainstorm, Imboden's 2,100 cavalrymen and 23 cannon left the battlefield the afternoon of July 4th. They escorted the 17 miles (27 km) long train of wagons and ambulances with the wounded and foodstores over the muddy roads to Williamsport. During the trip the wagon train was attacked by small units of Union cavalry several times. When he arrived at Williamsport on the afternoon of the 5th, he found the Potomac was flooded and could not be crossed. The rest of Lee's army followed on the night of July 4-5, screened by J.E.B. Stuart's Confederate cavalry. The next day, on discovering the Confederates had left the battlefield, the Union army cautiously followed.

Imboden, learning that a 3,000 strong Union cavalry was approaching, formed a semicircle to defend the town. He managed to fend them off until nightfall when a brigade of Confederate cavalry arrived to drive them off. By July 11, most of Lee's infantry had reached Williamsport. He strengthened the defenses and waited for the Potomac river to go down so they could cross. Mead's army reached Williamsport on the 12th and began probing the Confederate defenses. The Potomac finally was low enough to cross on July 13. A pontoon bridge had been constructed by Confederate engineers about 4 miles (6.4 km) downstream at Falling Waters. At both locations the Confederate army began crossing the river that evening.

The last of Lee's forces to cross the Potomac was his rearguard. This was a force of about 3,000 men commanded by Major General Henry Heth. They took their positions on the ridge behind Falling Waters after marching all night. On the morning of July 14, Meade was surprised to learn Lee had withdrawn most of his army across the Potomac. He immediately ordered two companies of Michigan cavalry under the command of a newly promoted General George Armstrong Custer to attack. The cavalry charged up the ridge to attack Heth's Confederates but were cut to pieces. Custer dismounted his cavalry and proceeded to fight on foot. At first the Confederate casualties were light. But in heavy fighting Confederate General J. Johnston Pettigrew, who commanded a North Carolina brigade under Heth, was mortally wounded. Additional Union forces arrived and in over two hours of fighting, over 500 Confederates were captured. Heth's men, carrying the wounded Pettigrew, withdrew over the river ending the battle. The Battle of Falling Waters was the last battle in the Gettysburg Campaign.

Major General Hugh Judson Kilpatrick, Custer's commanding officer, sent only two companies of cavalry against the two brigades of Confederates at Falling Waters. It was a lost opportunity and he did not wait for more units to arrive. To cover up his mistake, he claimed that his division took more than 1,500 prisoners. In an unusual move, Lee refuted this claim in the Northern newspapers. A correspondent for the New York Times gave yet another account: "The charge made upon the earthworks was one of the most gallant on record -- a squadron of fifty-seven men charging upon three or four brigades behind earthworks, killing one Major-General, (Pettigrew,) capturing more than 1,000 prisoners, and strewing the field with the killed and wounded of the enemy."

All content from Kiddle encyclopedia articles (including the article images and facts) can be freely used under Attribution-ShareAlike license, unless stated otherwise. Cite this article:
Battle of Falling Waters Facts for Kids. Kiddle Encyclopedia.