Big Moose Lake, at the head of the Moose River, is a large lake about five miles (8 km) north of Fourth Lake in the Adirondacks in upstate New York. The lake is part of Herkimer and Hamilton counties, covering portions of the towns of Webb and Long Lake. Located southwest of the lake is the hamlet of Big Moose.

The lake's popularity derives from its remoteness, climate and beauty

Located southwest of the lake is the hamlet of Big Moose; other nearby communities include Eagle Bay, Inlet, Old Forge, and Thendara. With minimal road access, the lake's shore is not heavily populated, experiencing its peak during the summer months when vacationers arrive at their summer homes or stay at local resorts.

The lake and its surrounding region are a popular spot for tourists year-round; boating, water-skiing and hiking are available in the summer, and cross-country skiing and snowmobiling take place in the winter. It is home to the Big Moose Water Ski Club that consists of residents of the region. 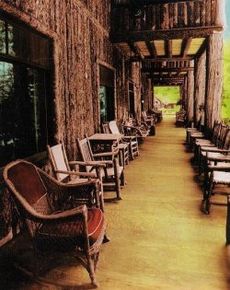 The lake's region was settled primarily during the late 19th and early 20th centuries by people arriving on the first railroad through the uninhabited Adirondack wilderness. Early trappers and hunters of the Adirondacks became guides there, eventually establishing permanent camps and hotels. Businessmen, in the style of the Great Camps of the Vanderbilts and Morgans, built private summer homes and brought their families. Some of these lodges still exist and the Big Moose Lake area is historically significant for its unique architecture utilizing vertical half-log construction in lodges and cabins.

Big Moose Lake was the setting of An American Tragedy, a novel by Theodore Dreiser. It is based on the true story of Chester Gillette, who was convicted and executed for the drowning of Grace Brown in the South Bay of Big Moose Lake in the first part of the 20th century. (The name Dreiser gave the lake where the murder took place was Big Bittern Lake, although he did visit Big Moose Lake and used it as a model for his fictional version.) The Academy Award-winning film, A Place in the Sun, starring Elizabeth Taylor, Shelley Winters and Montgomery Clift, is based on the book. The murder of Grace Brown continues to gain notoriety as claims of ghost sightings around the lake occur. In 1996, the television series Unsolved Mysteries aired an episode reenacting the tragedy, focusing on two such reported sightings. On July 11, 2006 a wreath-laying ceremony took place on South Bay in observance of the centennial of Brown's death. A small flotilla of watercraft participated.

A historical novel by Jennifer Donnelly, A Northern Light (2003), also takes its plot from the murder, but is told from the perspective of a young girl working at the Glenmore (a lodge) on the lake. The lake and the surrounding community also play a prominent role in Robert Tucker's 2013 novel, Sasquatch Camp.

Buildings of the palisade architectural style (built from vertically positioned half-logs) can be found in the area.

The following places are listed on the National Register of Historic Places:

All content from Kiddle encyclopedia articles (including the article images and facts) can be freely used under Attribution-ShareAlike license, unless stated otherwise. Cite this article:
Big Moose Lake Facts for Kids. Kiddle Encyclopedia.