Black Thunder (ブラックサンダー, Burakku Sandā) is a chocolate bar made and sold in Japan by the Yuraku Confectionery Company (有楽製菓株式会社, Yūraku Seika Kabushiki gaisha). It contains a cocoa-flavored cookie bar mixed with Japanese-style rice puffs, coated with chocolate. The manufacturer's suggested retail price is ¥30, before tax. The main advertising slogan translates to "Delicious taste in a flash of lightning!" The story of the Yuraku Confectionery Company and its Black Thunder bar has been treated in the Japanese business press as something of a modern-day rags to riches story.

The Black Thunder bar was conceived as an easily marketable candy bar with three popular components and a reasonable price. The name was partially inspired by the Japanese god of thunder. Black Thunder bars were first made in a factory in the city of Toyohashi in 1994. The target demographic was university students in the Kantō region and sales growth depended mostly on word-of-mouth recommendations. Through a series of marketing deals starting in 2004, sales of Black Thunder gradually climbed. In 2008, the Yuraku Confectionery company sponsored the Men's Gymnastics team at the 2008 Summer Olympics, and brand recognition correspondingly increased. 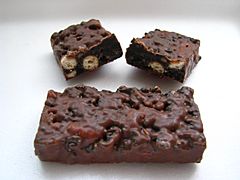 Two Black Thunder bars: one whole and one cut to show cross-section.

The original concept was a candy bar that would have three main components, a heavy texture, rich flavor, and a reasonable price; the combination of these qualities would ensure that it would be an easily marketable product. It was later decided it should be appealing to as many demographic groups as possible, including children. A candy bar was developed with a dark cocoa-flavored cookie pieces mixed with Japanese-style crisped rice, and finally coated with dark milk chocolate. The cookie bar is pressed relatively flat on five sides; however, the top of the bar presents an uneven surface, even with the chocolate coating. When it came to a name for the product, it was decided that the keyword should be the color "black", which would allude to the dark chocolate flavor. This is in keeping with other marketing trends in Japan, where the color "black" is associated with dark or bittersweet chocolate, such as the popular Meiji Black chocolate bar. To give the product some "impact" with consumers, it was decided to name it after the Japanese god of thunder, Raijin. Although the name of the product uses the English words "Black Thunder" (pronounced or transliterated as Burakku Sandah), the outer package also carries the Japanese kanji term for the product in a smaller font (黒い雷神kuroi raijin), so that the meaning would not be lost on consumers. An advertising slogan recorded from the development period translates to, "Delicious taste like a flash of lightning!" (おいしさイナズマ級! Oishisa Inazuma-kyū!), but was initially rejected in favor of the basic one-line descriptive "Black cocoa crunch".

During initial development, a chocolate bar with three kinds of nuts was developed, called "ChocoNuts 3". However, it was terminated within a short time, as it was thought it would not appeal to children. The Black Thunder bar was then developed based on the original concept specifications but also with the idea that it would appeal to multiple demographic segments, including children.

In 1994, a small factory with only twenty employees in the city of Toyohashi in Aichi Prefecture began making the Black Thunder chocolate bars. The packaging at that time used alphabetic script that read "Black Thunder", and the suggested retail price was set at 30 yen. By the year 2000, sales were not impressive, but it was decided to keep the product. At the same time, the package design was altered, and the concept slogan was added: "Delicious taste in a flash of lightning!" In August 2003, the package was changed again to its current design, in which alphabetic font for the brand name was replaced with Japanese lettering in katakana. Finally, a new advertising slogan aimed at a specific demographic was added to the front of the package: "A big hit among young women!" Throughout this early period, sales growth was largely dependent on word-of-mouth recommendations.

Though initially distributed only to 7-Eleven stores in the Kantō region, a potential for expanded marketing was realized, and Black Thunder was released for sale through a cooperative business association into more areas. During the 2004 to 2005 sales year, Black Thunder bars saw a sudden surge in popularity in the Kyushu region. During the summer of 2005, Black Thunder bars were distributed in more regions across the country. By the end of the year, over 900,000 units had been sold and Black Thunder bars were the best-selling product of the Yuraku Confectionery Company. In 2006, it was picked up by the Shiraishi-san Co-op and sold over the internet, and product sales received a boost as it gained in popularity among university students. In the first three years after sales commenced over the internet, about ten times the number of Black Thunder bars were sold since its inception eleven years earlier. In 2008, the Yuraku Confectionery company sponsored the Men's Gymnastics team at the 2008 Summer Olympics in Beijing. The team earned the Silver Medal, as did individual gymnast Kōhei Uchimura. After the 19-year-old gymnast actively endorsed the product in news media, brand recognition jumped considerably and from 2008 to 2009, total sales jumped from just under 50 million units to the landmark number of 100 million. By 2010, sales had reached 130 million units.

At present, Black Thunder bars are made in four factories located in Sapporo, Tokyo, Osaka, and the original factory in Toyohashi. From any of these, Black Thunder bars can be shipped to various convenience stores and discount stores across the country, and they are still distributed to all university student co-operatives in the Kanto area.

Yuraku has produced a number of variations on the original Black Thunder bar, with different target demographics, or in collaboration with other commercial ventures. This section includes some of the more notable products by Yuraku. Other Black Thunder products may be available to a restricted market or for a limited time period.

In 2008, Yuraku branched out with the product in an effort to appeal to a broader demographic. The "Big Thunder" (ビッグサンダー, Biggu Sandā) candy bar was developed, which is about twice the length and width of the original bar, but about half the thickness. The main slogan can be translated to "Big satisfaction for the glutton!!" (くいしんぼうも大満足！！, Kuishinbō mo Dai-manzoku!!), though the package also bears the slogans "Deliciousness! Size! Double the lightning strike!" (おいしさ！大きさ！ダブルイナズマ！, Oishisa! Ōkisa! Daburu Inazuma!) and "The great rage of Raijin!" (雷神大暴れ！, Raijin Ō-abare!).

Black Thunder has also been sold in the form of a "Mini-bar" since 2008. The mini-bars are about half the size and width of the regular size, and sold in packages. It was thought that the greater volume would appeal to cost-conscious families. While the regular Big Thunder bar is sold mainly in convenience stores, the target venue for the Mini-bars has been grocery stores.

In March 2009, in collaboration with the radio show Dear Girl Stories with Hiroshi Kamiya and Daisuke Ono and Nippon Cultural Broadcasting, the "Dear Girl Thunder" candy bar was developed. The flavor of the Dear Girl Thunder bar was advertised as "The Taste of First Love: Salt and Chocolate" (初恋の味・塩チョコ Hatsukoi no aji: Shio-choco). In Japan, chocolate is associated with Valentine's Day and is considered an appropriate gift between sweethearts; salty foods are considered "adult" and are thus associated with maturity. A person's "first love" is, like in other cultures, something of a rite of passage; an episode in life sweet in sentiment, but with maturing results. In July 2009, a limited edition of 480 units of the Dear Girl Thunder bar went on sale and quickly sold out. In October 2010, the Dear Girl Thunder bar went on sale in FamilyMart convenience stores (with the exception of the stores in one region). During 2010, consumers questioned why Black Thunder bars were not distributed to areas of Hokkaido, Miyazaki, Kagoshima, and Okinawa, and the company responded with research into the feasibility of nationwide distribution. In January 2011, it was decided that a second edition of the Dear Girl Thunder bar would be distributed to Animate stores, a retailer that specializes in anime, manga, and video games. It would also be marketed on the mail order website of Cho!A&G+, a branch of Nippon Cultural Broadcasting, Inc., that focuses on digital radio broadcasting. Both deals ensure that consumers across the country can purchase the Dear Girl Thunder bars.

In December 2010, Yuraku Confectionery Company introduced "White Black Thunder" bars, called Shiroi Black Thunder (白いブラックサンダー Shiroi Burakku Sandā), for a limited run of six months. The cookie and rice puff core are the same as Black Thunder, but the outer chocolate coating is white. The package mentions "From Hokkaido", an area which has been associated with white chocolate since its introduction by the Rokkatei Confectionery, based in Obihiro, Hokkaido, in the 1970s. The advertising slogan can be translated as: "Straight descent into deliciousness!" (おいしさ直滑降 Oishisa Chokkakkō), and uses a term distinctly related to the steep slopes of Alpine skiing. Within a short time, the White Thunder bar has proven to be quite popular, as demonstrated by the rapid depletion of stocks.

In January 2011, the Morning Thunder bar was introduced (モーニングサンダー Mōningu Sandā). Intended as a breakfast bar, the Morning Thunder contains a cinnamon-flavored cookie mixed with peanuts and soy bean puffs, fortified with extra protein, and coated in milk chocolate. The slogan on the front of the package states: "Protein and peanuts in a filling chocolate bar" (ブチプロテイン＆ピーナッツin満足系チョコバー Buchi Purotein ando Pīnattsu in Manzoku-kei Choko Bā). A limited run of twelve months was planned for the Morning Thunder bar.

Various other products related to Black Thunder are or have been marketed by Yuraku for limited periods. The list below contains some of the variations on the Black Thunder candy bar, or special editions of the outer package.

In April 2010, it was announced that there would be a collaboration with Guacamole brand clothing designers. The result was a line of swimwear for men and women, and a selection of men's underwear. Most items sport black or gold lightning designs.

In 2011, a hardcover book was published about the history and various trivia related to Black Thunder bars. Released on February 9, 2011 to book stores and convenience stores, the title translates to The Mystery of Black Thunder (謎のブラックサンダー Nazo no Burakku Sandā).

In August 2017, Yuraku announced a collaboration with McDonald's Corporation of Japan. The McFlurry Black Thunder would be added to the McDonald's menu in Japan, and would be available for a limited time, starting 16 August 2017.

All content from Kiddle encyclopedia articles (including the article images and facts) can be freely used under Attribution-ShareAlike license, unless stated otherwise. Cite this article:
Black Thunder (chocolate bar) Facts for Kids. Kiddle Encyclopedia.