The Bolān Pass (Urdu: درۂ بولان) is a mountain pass through the Toba Kakar range of Balochistan province in western Pakistan, 120 km (75 mi) from the Afghanistan border. The pass is an 89 km (55 mi) stretch of the Bolan river valley from Rindli in the south to Darwāza near Kolpur in the north. It is made up of a number of narrow gorges and stretches. It connects Sibi with Quetta both by road and railway.

Strategically located, traders, invaders, and nomadic tribes have also used it as a gateway to and from South Asia. The Bolān Pass is an important pass on the Baluch frontier, connecting Jacobabad and Sibi with Quetta, which has always occupied an important place in the history of British campaigns in Afghanistan.

The local population south of the pass predominantly consists of Brahvi tribes, who extend from Bolan Pass to Cape Monze on the Arabian Sea. The ethnic group North of the pass consists of mainly Pashtuns, while to west are Baloch.

The Bolan Pass is located in the Toba Kakar range, which lies south of the Hindu Kush mountain ranges. Bolan Pass is described as a pass over a lofty range that is full of ravines and gorges. The mountain ranges of the Bolan pass are the southern geographic border between the Indian plate and the Iranian plateau. The southern point of the pass, Near Dhadar, is the western bound of the Indus Valley and is seen as a great strategic point between Pakistan, Afghanistan, Iran and the Arabian Sea. 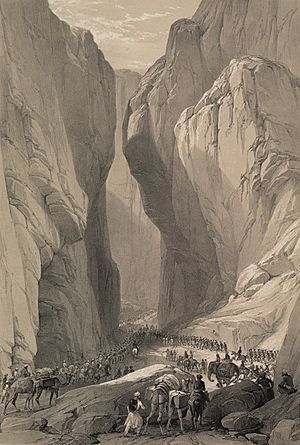 "Entrance to the Bolan Pass from Dadur"; Sketch by James Atkinson, 1842 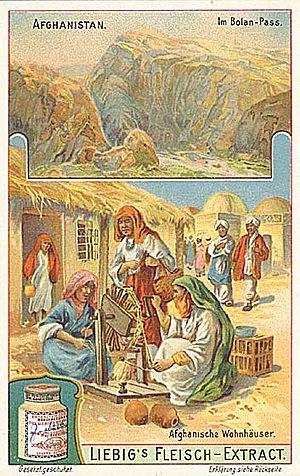 The Bolan pass is the southern counterpart of the Khyber Pass, and both ranges have been used throughout history for invasions of the Indian subcontinent. In 1748, the Afghan king Ahmad Shah Durrani invaded India by using the Bolan Pass in addition to the traditional Khyber Pass route. The Durrani capital Qandahar was located nearby the pass, which gave quick access to Indian lands.

In 1837, threatened by a possible Russian invasion of South Asia via the Khyber and Bolān Passes, a British envoy was sent to Kabul to gain support of the Emir, Dost Mohammed. In February 1839 during the First Anglo-Afghan War, the British Army under Sir John Keane took 12,000 men through the Bolān Pass and entered Qandahar, which the Afghan Princes had abandoned; from there they would go on to attack and overthrow Ghazni.The pass they chose was not the same as that used by the modern railway line, but further west at Siri-Bolan.

In 1883, Sir Robert Groves Sandeman negotiated with the Khan of Kalat, Khudadad Khan, and secured British control over the pass in exchange for an annual fee. 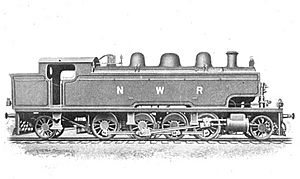 Tank locomotive, built around 1907 for service on the Bolān Pass railway

From Sibi the line runs south-west, skirting the hills to Rindli, and originally followed the course of the Bolān stream to its head on the plateau. The destructive action of floods, however, led to the abandonment of this alignment, and the railway now follows the Mashkaf valley (which debouches into the plains close to Sibi), and is carried from near the head of the Mashkaf to a junction with the Bolān at Machh.

An alternative route from Sibi to Quetta was found in the Harnai valley to the N.E. of Sibi, the line starting in exactly the opposite direction to that of the Bolān and entering the hills at Nari.

The Harnai route, although longer, is the one adopted for all ordinary traffic, the Bolān loop being reserved for emergencies. At the Khundilani gorge of the Bolān route conglomerate cliffs, which rise to a height of 800 ft., enclose the valley. At Siri Bolān the passage between the limestone rocks hardly admits of three persons riding abreast.

The temperature of the pass in summer is very high, whereas in winter, near its head, the cold is extreme, and the ice-cold wind rushing down the narrow outlet becomes destructive to life. Since 1877, when the Quetta agency was founded, the pass was secured by the British Indian Army from militias of Baluch tribesmen (chiefly Marris).

All content from Kiddle encyclopedia articles (including the article images and facts) can be freely used under Attribution-ShareAlike license, unless stated otherwise. Cite this article:
Bolan Pass Facts for Kids. Kiddle Encyclopedia.