Bracken Hall Countryside Centre and Museum is a children's museum, natural history education centre and nature centre established in 1989 at Bracken Hall on the edge of Baildon Moor, close to Shipley Glen in West Yorkshire.

In 2013 the Bradford Council removed their funding of the museum. The Friends of Bracken Hall worked to gather support in order to reopen the museum, and whilst the centre was planned to re-open in late 2015, it was finally re-opened to the public in April 2016 with the help of Baildon Town Council. 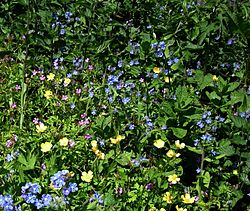 This c. 1890s Yorkshire gritstone building was once a bailiff's house, then a farm house, and it still has the original big, old, panelled front door. It is of the traditional rural, symmetrical, four-up, four-down domestic design which was common in the Georgian era and continued throughout the 19th century. This type of house has two rooms each side of the front door, stairs in the middle leading back from the front door, and two upstairs bedrooms each side of the stairwell, with a 19th-century dressing room above the front hall. The walls between front and back rooms are load-bearing, and supported by the two chimneys, which allow fireplaces in all eight main rooms. Bradford City Council has built an extra ground-floor room onto the left hand side, and this contains the museum entrance door and reception. The two original downstairs front rooms are now the Archaeology room and Exhibition room. The public cannot see the two downstairs back rooms, the stairs or the upstairs rooms, which are now accessed from behind the reception desk; therefore the public has access to just a quarter of the original building. The back door leads from the new entrance room to the back garden and the toilets. 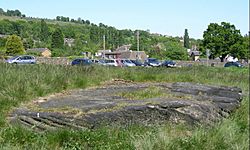 This children's museum and countryside centre specialises in interactive displays for all ages, indoor and out. When the museum is open, the public can walk through the ground floor rooms of the museum, and through the back and front gardens which are dedicated to wildlife discovery. The whole site and surrounding moor and glen are used for public groups on Wild Wednesdays and on guided walks, and for school groups when the museum is closed to the public: all these groups by appointment.

This changes with the seasons. In May and June there are many wild flowers, including green alkanet, herb Robert and creeping buttercup. There are bird feeders which attract various finches and tits, and an animal hutch for a rabbit or guinea pig. There is a double gate so that the animal could occasionally be safely let out to graze under staff supervision. 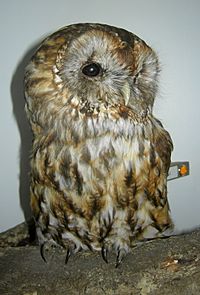 Close up of the mounted tawny owl.

Due to the vigorously interactive nature of children, and the transient nature of wildlife, some of the following displays will be regularly replaced with other items of interest.

In the Entrance room next to Reception is a six-foot-high, interactive video microscope. You place a dish of natural objects (for example houseflies) on the lighted tray at the bottom, and move it around until it shows in the video screen at the top. The tray is at child-height to enable youngsters to take part. On the screen a housefly looks bigger than your hand, so that its details might be observed easily. 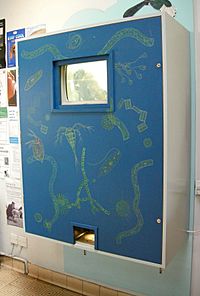 Honeycomb and remains of wasp nest

On the wall opposite Reception there used to be an indoor beehive with an observation panel for the children, but it was dismantled due to colony collapse disorder. It has been replaced with an information board about bees, and a honeycomb for the children to handle. The wall-display explains bee hierarchy, bee behaviour and hive structure. There is also an information board about wasps. Like the bee board, this board explains behaviour and nest structure, but it also mentions the wasp's usefulness in organic pest control. Below it are the remains of a wasp nest so that the children can compare the papery and waxy textures of the nest and honeycomb. 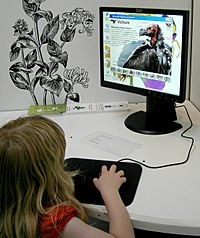 This computer uses a Dangerous Creatures CD-ROM, a program for children which allows them to learn about wildlife outside the UK while being entertained. It is situated halfway along the wall opposite Reception. Near the computer is an identification-by-touch display of natural objects.

On the same side wall opposite Reception there are two interactive boards. One, made of painted plywood, is for young children, and has large wooden handles which cause rabbits, birds and other animals to pop up out of holes in the screen. The other is for slightly older children, and contains safety-glass panels with pictured or mounted animals behind. There is a row of wooden flaps painted with animal pictures. The children try to name the animals, then lift the flaps to read the names.

This safety-glass display is behind the entrance door, and set low enough for young children to see some of the mounted birds at eye-level. It contains garden birds, a wren's nest and a tawny owl. This display plays birdsong recordings, which young children can learn quickly. This serves as an introduction to pishing.

In the lobby or original entrance hall you can see the inside of the heavy, panelled, original front door. There is a sheaf of wildlife-identification quiz-sheets, and a board of numbered pictures to identify. The pictures include some unusual specimens, so the quiz is pitched at both adult and child level.

There are various displays and wildlife pictures here, which are regularly rotated according to requirement. 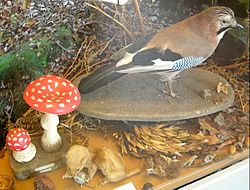 This would have been the right-hand reception room of the original Bracken Hall farmhouse. It is used as a gallery. The table contains reference books which may assist with part of the wildlife identification quiz. The room is also used for educational group visits.

Display of past and present nature study

This corner display, behind safety-glass, contains evidence which children can use to compare old and new methods of studying botany. For example, they can see the more academic approach of previous centuries, including the obsession with classification and dusty books, together with hand-coloured drawings and a brass optical microscope. They can compare what was once known as botanizing with the modern muddy-boots-and-fieldwork approach, expensive cameras and cheap field-guides.

Here is another example of the taxidermist's art. There are autumn seeds to identify in this display, and an opportunity for a close-up view of some of the UK's more shy animals: the weasel, shrew and jay. 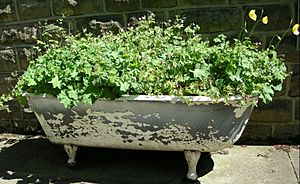 Herb Robert and Welsh poppy growing in a bath

This is accessed via the back door of the Entrance room, or by walking left across the front lawn. In the back yard are the toilets, and an animal hutch.

In the side garden there is a raised lawn, with a minibeast trapdoor laid on the bare earth. This allows small invertebrates to shelter under it, and children can expose them by lifting the trapdoor. The trapdoor is light enough for a five-year-old to lift easily. Slugs, snails, earthworms, woodlouse and millipedes are likely inhabitants here. On the lawn is another animal hutch, a safety cage for beehives - disused due to colony collapse disorder - and a shed with batboxes fixed to the side. There are two old bramley apple trees, and a facsimile cup and ring stone for the children to handle.

Here is an old bathtub full of wild flowers growing, and a safety cage for the now-disused entrance to the indoor beehive. Bumble bees still constantly try to use the entrance in early summer. Wellington boots dry on the bench: it can be muddy here for most of the year.

The children's dipping pond is accessed from the side lawn or from the front lawn. It contains yellow flags, tadpoles, frogs, newts, efts and other pondlife.

Bracken Hall dipping pond, image (2). This photo was taken seconds after image (1). The newt has moved slightly lower, under the vegetation. View at max resolution to see the hidden newt's head. 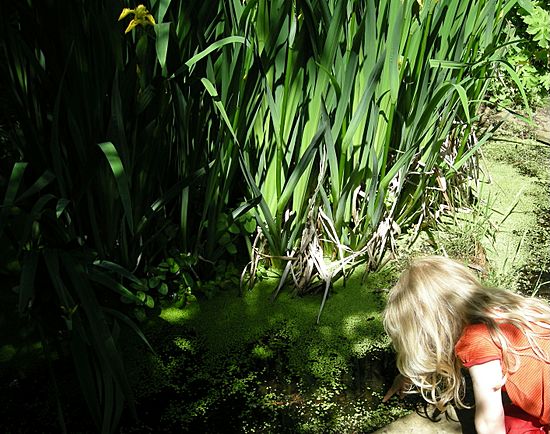 Across the road from the museum is Baildon Moor which has long been used by the public as a recreation area. There was once a Victorian funfair on the moor, and its story can be read on the wall of the Archaeology room. On the moor opposite Bracken Hall there is a neolithic stone circle. Five minutes' walk away, on the far side of this bit of moor, is Shipley Glen, where some of the Bracken Hall nature walks take place, and where the Roman coin in the Archaeology room was found. There is limited parking on the edge of the moor for visitors to the museum. The museum gardens and moor may be muddy after rain: boots are advisable. 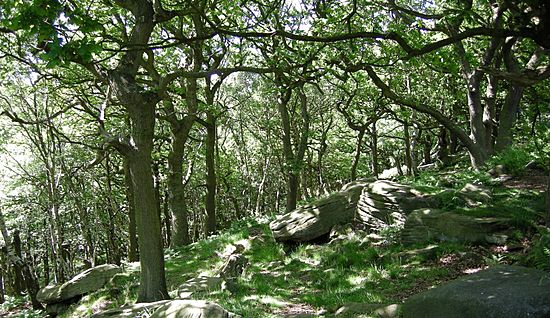 All content from Kiddle encyclopedia articles (including the article images and facts) can be freely used under Attribution-ShareAlike license, unless stated otherwise. Cite this article:
Bracken Hall Countryside Centre and Museum Facts for Kids. Kiddle Encyclopedia.