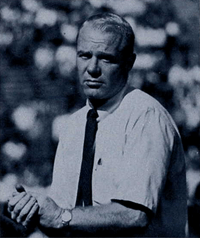 He played halfback at Purdue University (1943–1944) and the University of Michigan (1946–1947). Elliott spent ten years as an assistant football coach at Oregon State, Iowa, and Michigan. He was appointed as Michigan's head football coach in 1959 and held that position until 1968.

From 1970 to 1991, he was the athletic director at the University of Iowa. In 1989, Elliott was added into the College Football Hall of Fame.

All content from Kiddle encyclopedia articles (including the article images and facts) can be freely used under Attribution-ShareAlike license, unless stated otherwise. Cite this article:
Bump Elliott Facts for Kids. Kiddle Encyclopedia.