Most Valuable Player facts for kids 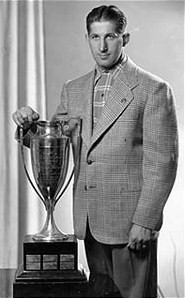 Elmer Lach with the original Hart Memorial Trophy in 1945

In sports, a Most Valuable Player award is an honour given to the player or players of a team that performed better than the other players throughout a league or contest. It was first used in professional sports, but is now used a lot in amateur sports and other things unrelated to sports, such as business and music awards. A similar award used in sports, often in soccer, is man of the match.

All content from Kiddle encyclopedia articles (including the article images and facts) can be freely used under Attribution-ShareAlike license, unless stated otherwise. Cite this article:
Most Valuable Player Facts for Kids. Kiddle Encyclopedia.