Buntingford is a small market town and civil parish in the district of East Hertfordshire and county of Hertfordshire in England. It lies on the River Rib and on the Roman road Ermine Street. As a result of its location, it grew mainly as a staging post with many coaching inns and has an 18th-century one cell prison known as 'The Cage' by the ford at the end of Church Street. It has a population of 4,820.The town also has an annual firework display at The Bury, presented by Buntingford Town Football Club. It is Hertfordshire's smallest town.

The Prime Meridian passes to the east of Buntingford.

The town has a large number of Georgian and mediaeval buildings, such as Buntingford almshouses, Buntingford Manor House and the Red House. Buntingford was a stop-over on what was the main route between London and Cambridge, now the A10. Due to its desirability as a commuter town in recent years, the town has grown considerably in the past few decades, the most noticeable recent addition being the 'Bovis Estate' (c. 1990), informally named after the housing firm that constructed there; its main road is Luynes Rise, named due to the town's twinning with Luynes (near Tours) in France. Other housing estates are: Freman Drive, Vicarage Road, Snells Mead, Downhall Ley, Monks Walk, and Kingfisher Park.

Buntingford was traditionally located within the parish of Layston - St Bartholomew's Church (Layston) is now derelict and lies about half a mile to the north-east of the town. St Peter's Church, formerly a relief chapel, is the Anglican church in Buntingford and is an almost unique brick building from the age of the 17th-century Puritans. St Richard's serves the Roman Catholic community. There is also a United Reformed Church in Baldock Road. Queen Elizabeth I stayed at Buntingford in a building now called the Bell House Gallery, on a coach journey to Cambridge. Just up the High Street, The Angel Inn (now a dental surgery) was a staging post catering for coaches travelling from London to Cambridge.

The name of the town is believed to originate from the Saxon chieftain or tribe Bunta; it does not refer to the bird Bunting, or the festive flag-like decorations.

Market day is Monday, and early closing Wednesday. The Buntingford Carnival is held every other year. There is also a classic car event held in the town each year, usually in the early autumn.

The town has a number of public houses - The Brambles (formerly The Chequers), The Fox and Duck, The Black Bull, The Crown and The Jolly Sailors.

The 'World Sausage Tossing Championship' has taken place at The Countryman Inn, in Chipping near Buntingford, every August since 2014.

Buntingford railway station, opened in 1863, was closed in 1964 under the Beeching cuts. This was located as the terminus for the Buntingford Branch Line. Recently it has been redeveloped into housing. 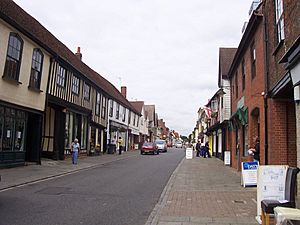 All content from Kiddle encyclopedia articles (including the article images and facts) can be freely used under Attribution-ShareAlike license, unless stated otherwise. Cite this article:
Buntingford Facts for Kids. Kiddle Encyclopedia.