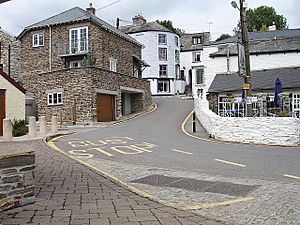 Calstock (Cornish: Kalstok) is a parish and a large village in south east Cornwall, United Kingdom, on the River Tamar near the border with Devon. The village is 6 miles (9.7 km) south west of Tavistock and 10 miles (16 km) north of Plymouth.

The parish had a population of 6,095 in the 2001 census. As well as Calstock, other settlements in the parish include Albaston, Chilsworthy, Gunnislake, Harrowbarrow, Latchley and Metherell.

Calstock village is within the Tamar Valley Area of Outstanding Natural Beauty and lies on the scenic Tamar Valley railway. Mining was formerly an important industry here.

All content from Kiddle encyclopedia articles (including the article images and facts) can be freely used under Attribution-ShareAlike license, unless stated otherwise. Cite this article:
Calstock Facts for Kids. Kiddle Encyclopedia.