Kids Encyclopedia Facts
This page is about the cape in Florida. For the cape in Nova Scotia, see Cape Sable Island. 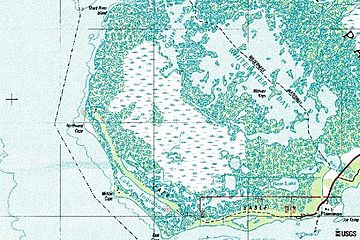 Cape Sable, Florida, is the southernmost point of the US mainland and mainland Florida. It is located in southwestern Florida, in Monroe County, and is part of the Everglades National Park. The cape is a peninsula issuing from the southeastern part of the Florida mainland, running west and curving around to the north, reaching Ponce de Leon Bay, at the mouth of the Shark River. It forms the southern and western margins of Whitewater Bay. There are three prominent points on the cape, East Cape, which is the actual southernmost point of the Florida and United States mainland and the location of Lake Ingraham, the southernmost lake in the United States of America, Middle Cape, also known as Palm Point, and Northwest Cape. The cape has many lakes and beaches. It is home to the mangrove diamondback terrapin (Malaclemys terrapin rhizophorarum) and the Florida gopher tortoise (Gopherus polyphemus). Before Hurricane Donna (1960) reduced their range, more than 3,000 of the now-endangered Cape Sable seaside sparrows (Ammodramus maritimus mirabilis) used the cape.

Nearly the full length of the cape facing Florida Bay and the Gulf of Mexico is a fine sand beach extending inland less than 100 yards. Behind the beach in the eastern and middle parts of the cape is a marl prairie, extending from Flamingo to approximately Northwest Point. Inland from the marl prairie, and over all of the northern part of the cape behind the beaches, is a complex of marshes and mangrove covered land. The largest lake on the cape is Lake Ingraham, which is long and narrow, running just behind the beach from near East Cape to past Middle Cape.

There is little evidence of any extensive settlement of Cape Sable by humans. There are adequate sources of fresh water on the cape, and areas of arable land. There are a few small Indian shell mounds there. The Spanish reported a Tequesta village on the cape. The pre-Seminole tribes of south Florida did not practice agriculture, and probably used the cape as a base for fishing and hunting.

Mariners and fishermen visited the Cape to take on fresh water. Hunters also visited the cape, which had more wildlife than the Florida Keys. During the Second Seminole War, residents of the Florida Keys worried about Seminoles' using Cape Sable and threatening the keys. In 1840 a Seminole raiding party, which was believed to have traveled over Cape Sable, attacked and destroyed the settlement on Indian Key.

The United States government was concerned that Spanish authorities in Cuba were supplying the Seminole to support their resistance. They knew that Cuban fishermen, including the Spanish Indians who had been evacuated to Cuba from Florida in 1821, continued to fish along the southwest Florida coast. The United States Army established Fort Poinsett on East Cape in 1838 to discourage contacts with the Spanish and to protect the Keys. This fort did not prevent the Seminole attack on Indian Key. In 1856, during the Third Seminole War, the Army established Fort Cross on Middle Cape. Traces of Fort Poinsett could be seen until it was destroyed by the Labor Day Hurricane of 1935.

All content from Kiddle encyclopedia articles (including the article images and facts) can be freely used under Attribution-ShareAlike license, unless stated otherwise. Cite this article:
Cape Sable Facts for Kids. Kiddle Encyclopedia.