Capulin Volcano National Monument is a U.S. National Monument located in northeastern New Mexico that protects and interprets an extinct cinder cone volcano and is part of the Raton-Clayton Volcanic Field. A paved road spirals gradually around the volcano and visitors can drive up to a parking lot at the rim of the extinct volcano. Hiking trails circle the rim as well as lead down into the mouth of the volcano. The monument was designated on August 9, 1916 and is administered by the National Park Service. The volcano is located 5 kilometres (3.1 mi) north of the village of Capulin.

The visitor center features exhibits about the volcano and the area's geology, natural and cultural history, and offers educational programs about volcanoes. There is also a video presentation about the volcano. The name capulin comes from a type of choke cherry, Prunus virginiana, that is native to southern North America.

Apollo 16's John Young and Charlie Duke did some of their geologic training here in May 1971. William R. Muehlberger was one of the geology instructors.

From the National Park Service:

Capulin Volcano National Monument is a well-preserved, relatively young (55,000 to 62,000 years old), symmetrical cinder cone. It rises steeply from the surrounding grassland plains to an elevation of 8,182 feet above sea level. The irregular rim of the crater is about a mile in circumference and the crater about 400 feet deep.

Capulin Volcano is one of the outstanding landmarks located in the northeast corner of New Mexico, where the rolling grasslands meet the foothills of the Sangre de Cristo Mountains. Capulin Volcano's highest point provides unobstructed, panoramic views of the volcanic field, distant snow-capped mountains, and portions of five states (New Mexico, Oklahoma, Kansas, Texas and Colorado).

Panorama view from the top 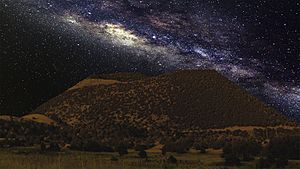 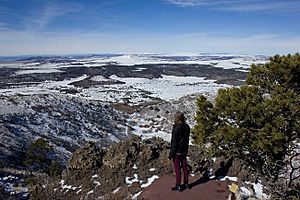 The two mile road that winds from the bottom of the volcano all the way to the top is popular with visitors. Once the top is reached, views of the surrounding volcano field, Sangre De Cristo mountains, the flora and fauna are visible. From late June to early August a phenomenon called hilltopping can be seen on the Crater Rim trail, thousands upon thousands of ladybugs cover trees and bushes at the top of the volcano. Capulin is also International Dark-Sky Association Gold Tier Certified, which means it has one of the darkest night skies in the entire country. Due to low levels of light pollution incredible views of the Milky Way and constellations are evident.

According to the National Park Service, on January 16, 1891, Capulin Mountain was

...withdrawn from settlement, entry or other disposition under any of the public land laws, until such time as Congress may see fit to take action touching the same or until otherwise ordered by competent authority...

On August 9, 1916, President Woodrow Wilson set Capulin aside as a U.S. National Monument by Presidential Proclamation No. 1340, to preserve "...a striking example of recent extinct volcanoes ... which ...is of great scientific and especially geologic interest..."

Jessie Foote Jack and other local ranchers highly valued Capulin Volcano during this time period as it was considered prime grazing land. In order to ensure sole rights to graze cattle on the volcano, Jessie used her husband's political connections to secure the position of custodian for the monument. Serving from 1916 to 1921, Jessie Foote Jack was the first custodian for Capulin Volcano, as well as the first female custodian in the National Park Service.

In 1921, Homer Farr would unofficially become the custodian of the monument at the request of Mrs. Jack. Later, in 1923, Farr would officially take over the position serving the National Park Service until 1955. His enthusiasm for the volcano brought numerous changes to the monument. During his tenure, Farr was credited with building the monument's infrastructure which includes the road to the rim, procuring funding in economically difficult times, and garnering a Civil Works Project during the Great Depression to stabilize the road and build retaining walls.

Public Law 87-635, 87th Congress, S.2973, September 5, 1962, amended the proclamation to "...preserve the scenic and scientific integrity of Capulin Mountain National Monument..." because of the significance of Capulin Volcano. 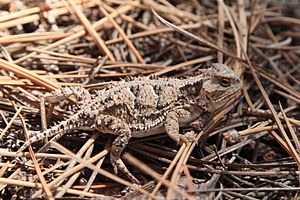 Although Capulin is primarily known for its volcanic geology, the park boasts a rich diversity of plant and animal life. The grasslands of the Great Plains and the forests of the Rocky Mountains combine at Capulin to form a unique ecotone which provides habitat for 73 species of birds in addition to numerous other animals. Songbirds such as the spotted towhee, Bullock's oriole, mountain bluebird, and Steller's jay all call Capulin Volcano home. Larger birds such as the wild turkey, osprey, red-tailed hawk, as well as New Mexico's state bird, the roadrunner. There are five different species of hummingbird that migrate through Capulin during the summer months.

Some of the larger mammals that frequent the park include the American black bear, cougar, pronghorn, elk, and the most numerous of larger mammals, the mule deer. Smaller mammals such as the American badger, Mexican free-tailed bat, ring-tailed cat, desert cottontail, and North American porcupine also like to call Capulin Volcano National Monument home. The unique landscape and flora create a habitat that allows a large and diverse group of animals to co-exist in a relatively small area. The abundance of diversity is not contained to just warm blooded animals however, Capulin also has a large group of cold blooded reptiles as well. The prairie rattlesnake and bullsnake are seen throughout the park. western fence lizards and horned lizards can be seen collecting the sun's rays on the multiple hiking trails. The tiger salamander is spotted in pools of water that sometimes collect around the park.

All content from Kiddle encyclopedia articles (including the article images and facts) can be freely used under Attribution-ShareAlike license, unless stated otherwise. Cite this article:
Capulin Volcano National Monument Facts for Kids. Kiddle Encyclopedia.