Chair Peak is a 6,238 ft (1,900 m) mountain summit located in east King County of Washington state. It's part of the Cascade Range and is set within the Alpine Lakes Wilderness. Chair Peak is situated three miles northwest of Snoqualmie Pass on land managed by Mount Baker-Snoqualmie National Forest. Precipitation runoff from this mountain drains into tributaries of the Snoqualmie River. Chair Peak is located immediately south of Snow Lake which is a popular hiking destination. The nearest higher neighbor is Kaleetan Peak, 0.57 miles (0.92 km) to the west-northwest. 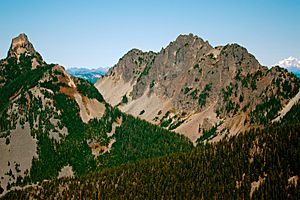 Most weather fronts originate in the Pacific Ocean, and travel northeast toward the Cascade Mountains. As fronts approach, they are forced upward by the peaks of the Cascade Range, causing them to drop their moisture in the form of rain or snowfall onto the Cascades (Orographic lift). As a result, the west side of the Cascades experiences high precipitation, especially during the winter months in the form of snowfall. Because of maritime influence, snow tends to be wet and heavy, resulting in high avalanche danger. During winter months, weather is usually cloudy, but due to high pressure systems over the Pacific Ocean that intensify during summer months, there is often little or no cloud cover during the summer. The months July through September offer the most favorable weather for viewing or climbing this peak.

The Alpine Lakes Wilderness features some of the most rugged topography in the Cascade Range with craggy peaks and ridges, deep glacial valleys, and granite walls spotted with over 700 mountain lakes. 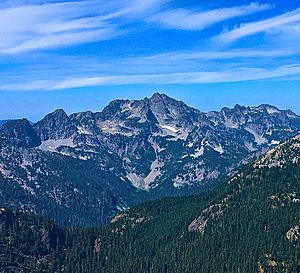 Geological events occurring many years ago created the diverse topography and drastic elevation changes over the Cascade Range leading to the various climate differences. These climate differences lead to vegetation variety defining the ecoregions in this area. The elevation range of this area is between about 1,000 feet (300 m) in the lower elevations to over 9,000 feet (2,700 m) on Mount Stuart. 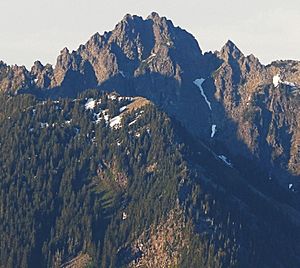 All content from Kiddle encyclopedia articles (including the article images and facts) can be freely used under Attribution-ShareAlike license, unless stated otherwise. Cite this article:
Chair Peak (Washington) Facts for Kids. Kiddle Encyclopedia.