Charlbury is a small town and civil parish in the Evenlode valley, about 6 miles (10 km) north of Witney in West Oxfordshire. It is on the edge of Wychwood Forest and the Cotswolds. The 2011 Census recorded the parish's population as 2,830.

Toponymic evidence suggests that Charlbury was an Anglo-Saxon settlement from an early date, and may be associated with 'Faerpinga in Middelenglum' listed in the Tribal Hidage of the 7th to 9th centuries. The name is a compound of two Old English elements. Burh is a fortified place. Ceorl (probably pronounced) is a "freeman of the lowest class", but other sources suggest it was also a personal name. For this reason some hold the latter two pronunciations more valid than the former, and the current spelling not phonetic, preferring "Chorlbury". The similarity between "Ceorl" and the personal name "Charles" is no accident: "Charles", "ceorl" and "churl", along with the modern German name "Karl" derive from the same Proto-Germanic word *karlaz.

On the outskirts of Charlbury is Lee Place, the former dower house of Ditchley and now the home of the Duchess of Marlborough.

The Church of England parish church of St Mary the Virgin is by tradition associated with Saint Diuma, the 7th century first Bishop of Mercia. By 1197 or 1198 the church belonged to Eynsham Abbey, which held the advowson of the parish until the Dissolution of the Monasteries in the 16th century.

The arcade between the nave and north aisle is Norman. In the 13th century the building was greatly enlarged: the chancel was extended eastwards and the south aisle, west tower and north and south chapels were added. In the 14th century the present Decorated Gothic east windows of the chancel and south chapel were added. During or before the 15th century the north aisle was widened. In the 15th century Perpendicular Gothic additions were made to the building: the tower was extended higher and a west door was inserted in its base, a clerestory was added to the nave and new windows were inserted in both aisles. In the 16th century the Perpendicular Gothic south porch was added. Two wooden galleries were added, possibly in the 18th century. In the 18th or early in the 19th century most of the windows lost their tracery.

The organ is a two-manual Wyvern digital instrument, installed in 2010 to replace a Makin digital in place since 1990. The bell tower has a ring of six bells, all cast in 1716 by Abraham I Rudhall of Gloucester plus a Sanctus bell cast by an unknown founder in about 1599. 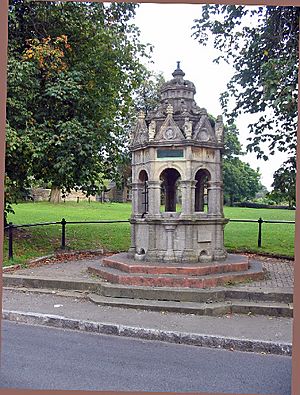 Jacobethan drinking fountain designed by John Kibble and erected in 1897 to commemorate the visit of Queen Victoria.

Quakerism reached Charlbury in the Commonwealth that followed the English Civil War. Anne Downer, the daughter of a former Vicar of Charlbury, joined the Religious Society of Friends in London in 1654. In 1655 she became the first Quaker woman preacher, for which she was imprisoned and beaten. In 1656 she preached in Chadlington, and then went to Cornwall to serve as secretary to the Quaker leader George Fox. She then preached at Charlbury, where Quaker meetings were held in the homes of two converts, William Cole and Alexander Harris. Both men were jailed in 1657–58 for refusing to pay tithes to the Church of England, and Cole died in prison.

Many Quakers in Charlbury were distrained for refusing to pay the Church Rate. In 1660 a Chadlington Quaker who attended the Charlbury meetings was jailed for refusing to swear the Oath of Allegiance and in 1663 Henry Shad, a Quaker schoolmaster, was barred from teaching.

In 1669 about 30 members were meeting in Harris's house. In 1680 a meeting at Cole's house to hear Thomas Taylor, a preacher from the north of England, was so crowded that the local Quakers decided to build a meeting house. Quakers including Thomas Gilkes of Sibford Gower gave land on which a meeting house was built in 1681. By 1689 the meeting house had a burial ground, but early in the next century membership declined and for a time meetings were discontinued.

In 1779 a new meeting house was built on the same site and the burial ground was enlarged. It is a square Georgian building with a hipped roof and arched windows. The number of members attending Quaker meetings was 35 in 1826 and 39 in 1851. After the First World War attendance declined rapidly and in the 1920s the meeting house was closed and turned into a preparatory school.

The Thomas Gilkes who helped to provide the land for the meeting house had a son of the same name who became a clockmaker in Sibford Gower. He trained his son – a third Thomas Gilkes (1704–57) – in the same trade. This Gilkes established his own clockmaking business in Charlbury, and was reputed also to be an eminent Quaker minister. He was succeeded by his son, a fourth Thomas Gilkes (1740–75). A number of longcase clocks made by the two men still exist.

William Harrison was a later Quaker clockmaker at Charlbury. A longcase clock that he made in about 1770 is known to survive. Another longcase clock by Harrison is in the Charlbury Society Museum. In 1792 Harrison installed the turret clock at University College, Oxford.

Quakers had to be apprenticed to fellow Quakers, and those at Charlbury were part of a network of Quaker clockmakers in north Oxfordshire who were all linked by either family, former apprenticeship or both. As well as Sibford and Charlbury, Adderbury and Deddington were also centres of Quaker clockmaking. 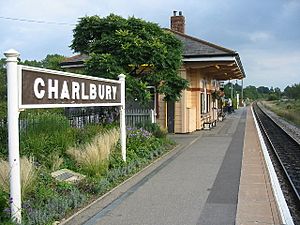 Charlbury railway station is on the Cotswold Line. It is served by First Great Western trains between London, Oxford, Great Malvern, Worcester and Hereford.

Charlbury Museum, opened in 1962, is a local museum run by the Charlbury Society.

Charlbury hosts a number of public events each year: the Riverside Music Festival in July, the Charlbury Beer Festival in late June or July, the Wilderness Festival in August, and Charlbury Street Fair, which dates back to 1955, in September. 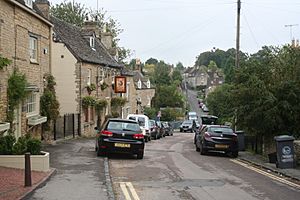 All content from Kiddle encyclopedia articles (including the article images and facts) can be freely used under Attribution-ShareAlike license, unless stated otherwise. Cite this article:
Charlbury Facts for Kids. Kiddle Encyclopedia.