Chernozem (from Russian: чернозём, tr. chernozyom; IPA: [tɕɪrnɐˈzʲɵm]; "black soil") is a black-colored soil containing a high percentage of humus (4% to 16%) and high percentages of phosphoric acids, phosphorus, and ammonia. Chernozem is very fertile and can produce high agricultural yields with its high moisture storage capacity. Chernozems are also a Reference Soil Group of the World Reference Base for Soil Resources (WRB). 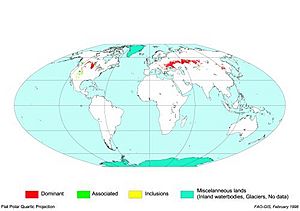 The name comes from the Russian terms for black and soil, earth or land (chorny + zemlya). The soil, rich in organic matter presenting a black color, was first identified by Russian geologist Vasily Dokuchaev in 1883 in the tallgrass steppe or prairie of European Russia.

Chernozems cover about 230 million hectares of land. There are two "chernozem belts" in the world. One is the Eurasian steppe which extends from eastern Croatia (Slavonia), along the Danube (northern Serbia, northern Bulgaria (Danubian Plain), southern and eastern Romania (Wallachian Plain and Moldavian Plain), and Moldova), to northeast Ukraine across the Central Black Earth Region of Central Russia, southern Russia into Siberia. The other stretches from the Canadian Prairies in Manitoba through the Great Plains of the US as far south as Kansas. Similar soil types occur in Texas and Hungary. Chernozem layer thickness may vary widely, from several centimetres up to 1.5 metres (60 inches) in Ukraine, as well as the Red River Valley region in the Northern US and Canada (location of the prehistoric Lake Agassiz).

The terrain can also be found in small quantities elsewhere (for example, on 1% of Poland). It also exists in Northeast China, near Harbin. The only true chernozem in Australia is located around Nimmitabel, with some of the richest soils in the nation.

Previously, there was a black market for the soil in Ukraine, where it is known as chornozem (Ukrainian: чорно́зем). The sale of agricultural land has been illegal in Ukraine since 1992 until the ban was lifted in 2020, but the soil, transported by truck, was able to be sold and bought. According to Kharkiv-based "Green Front" NGO, the black market for illegally acquired chernozem in Ukraine was projected to reach approximately US$900 million per year in 2011.

Chernozemic soils are a soil type in the Canadian system of soil classification and the World Reference Base for Soil Resources.

As seen in the list above the 19th and 20th century discussions on the pedogenesis of Chernozem originally stemmed from climatic conditions from the early Holocene to roughly 5500 BC. No single paleo-climate reconstruction, however, was able to accurately explain geochemical variations found in Chernozems throughout central Europe. It was not until explanations involving an anthropomorphic origin did a better theory develop. Vegetation burning via humans could explain the high magnetic susceptibility of Chernozem which is one of the highest of all soil types on Earth. This is thought to have occurred due to the initially deposited soil containing concentrations of goethite and ferrihydrite that was converted to maghemite via exposure to temperatures of at least 220 °C. Temperatures this high can only come from vegetation fires which given the rarity of such natural phenomenon in the modern day is thought to be caused by human induced fires in antiquity. Additionally, the accumulation of black carbon in some Chernozems spanning from North America to Lower Saxony is thought to partially originate from charred material. Given these wide variations, the term Chernozem summarizes different types of black soils that have the same appearance but different formation histories.

All content from Kiddle encyclopedia articles (including the article images and facts) can be freely used under Attribution-ShareAlike license, unless stated otherwise. Cite this article:
Chernozem Facts for Kids. Kiddle Encyclopedia.