Christopher Eccleston (born 16 February 1964) is an English actor. He played the Ninth Doctor on Doctor Who in 2005. Before playing the doctor, he played the Son of God in The Second Coming. He has acted in movies, such as Let Him Have It, Shallow Grave, and Gone in 60 Seconds.

On 2 April 2004, it was announced that Eccleston was to play the ninth incarnation of the Doctor in the revival of the BBC science fiction television series Doctor Who, which began transmission on 26 March 2005. Eccleston was the first actor to play the role who was born after the series began. 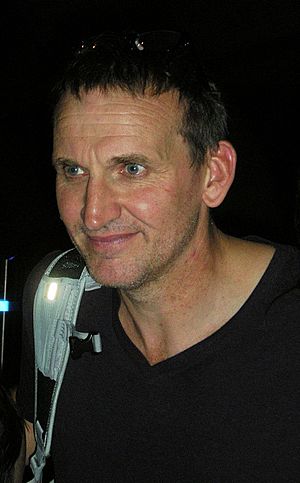 Eccleston at the National Theatre, London, May 2012

Eccleston married Mischka in November 2011. They had their first child, Albert, in February 2012. Their second child, Esme, was born in 2013. They were divorced in December 2015.

Eccleston formerly identified as an atheist, but in 2016 gave interviews describing his changing attitude towards faith and stated that he no longer considered himself an atheist, but agnostic.

He is a supporter of Manchester United and was a regular marathon runner until 2000.

In September 2007, as part of a £9.5m building scheme, Salford's Pendleton College named its new 260-seat auditorium the Eccleston Theatre.

Eccleston is an avid charity worker, becoming a Mencap charity ambassador on 28 April 2005, and is also a supporter of the British Red Cross.

All content from Kiddle encyclopedia articles (including the article images and facts) can be freely used under Attribution-ShareAlike license, unless stated otherwise. Cite this article:
Christopher Eccleston Facts for Kids. Kiddle Encyclopedia.