The petition to incorporate the town of Claxton was approved by Tattnall Superior Court in April 1894.

The town had its visionary, W.R. Hendricks. In May 1890 there were only a couple of dwellings scattered around the area that is Claxton. Hendricks, son of Glenn and Nancy Hendricks, had been given a large tract of land by his parents. The Hendricks' ambition was to secure a railroad station at the site, but they met considerable opposition from railroad company officials who maintained that existing stations in the area were sufficient to meet the needs. W.R. Hendricks made a proposition to railroad officials that a well be dug and pump installed free of charge so that trains could stop for water. The deal was made and actual construction began in the latter part of June 1890. The vision of building a town was fully supported by Hendricks' mother, who offered to give a lot to anyone who would erect a building upon it. A number of people accepted her offer, so she revised the plan and proposed to sell one lot and give the adjoining parcel to those who desired to build.

With the establishment of a town well underway, efforts were begun to establish a post office at the settlement already widely known as "Hendricks". Postal officials in Washington, D.C., upon receiving an application from George E. Wood, declined to approve the name, because a post office in the state was already operating under that name in Upson County. Two other names were then submitted, "Jenny" and "Claxton". Postal officials agreed to Claxton, and the post office opened in 1890.

There is some dispute about the origin of the name. Some local historians contend that the name of a popular actress, Kate Claxton, was the source, while others believe it was in honor of Philander Priestly Claxton, a noted educator of the time.

Shortly after the Claxton post office opened, D.C. Newton, one of the partners in a naval stores company, laid out on a sheet of brown wrapping paper what became the original map of Claxton. Newton drew in the streets, laid out lots and later added street names. The whereabouts of the original map is not known; however, it is believed that this first map remained in his possession until his death and was passed down to his son who died in the 1990s. Another map, believed to be similar to the original, was in the possession of R.R. "Bobby" Tippins, president of Tippins Bank and Trust Company and descendant of the family that founded the bank in Claxton, who died in the early 2000s.

According to the United States Census Bureau, Claxton has a total area of 1.7 square miles (4.5 km2), of which 0.02 square miles (0.04 km2), or 0.84%, is water. The city is in the coastal plain region of Georgia. Several types of tree, including pine, oak, sycamore, chinaberry, live oak, sweetgum, poplar, are prevalent in the area. 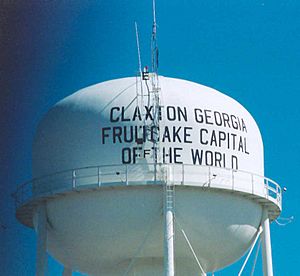 The water tower for Claxton, Georgia, celebrating its fruitcake manufacture.

The city is known as the home of the Claxton Fruit Cake which is exported from the world-famous Claxton Bakery and The Georgia Fruitcake Company. (See fruitcake.)

All content from Kiddle encyclopedia articles (including the article images and facts) can be freely used under Attribution-ShareAlike license, unless stated otherwise. Cite this article:
Claxton, Georgia Facts for Kids. Kiddle Encyclopedia.