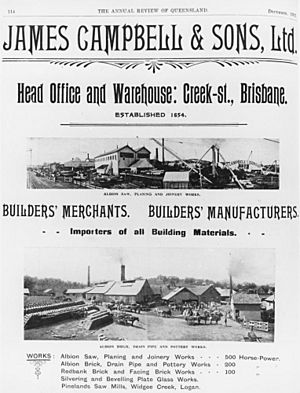 James Campbell had a sawmill in Creek Street, Brisbane. Logs were cut in the Blackall Range and upper Caboolture River and hauled to Mellum Creek from where they were rafted down the Pumicestone Passage to the Creek Street sawmill. In 1881, James Campbell decided to establish a sawmill on the Coochin Creek near the confluence with Mellum Creek, from where the sawn timber was transported to Brisbane, initially via sailing cutter and from 1883 by paddlesteamer.

The township of Campbellville of around 100 people developed around the sawmill. There was a wharf with cranes and a provisional school and cemetery. Campbellville lasted until 1890 when the mill closed down. By that time, the North Coast railway line had made it easier to transport logs and timber by rail than by ship.

There is a camping area off Roys Rd run by Queensland Government.

All content from Kiddle encyclopedia articles (including the article images and facts) can be freely used under Attribution-ShareAlike license, unless stated otherwise. Cite this article:
Coochin Creek Facts for Kids. Kiddle Encyclopedia.