Crawford is a city in Dawes County, in the northwestern part of the state of Nebraska, in the Great Plains region of the United States. The population was 997 at the 2010 census. It was incorporated in 1886 and was named for the late Captain Emmet Crawford who had previously been stationed at nearby Fort Robinson.

The Fremont, Elkhorn and Missouri Valley Railroad reached Fort Robinson in 1886 on its way to Wyoming. Several miles east of the Fort the railroad passed through a tree claim belonging to William Annin (also spelled "Annon"), who sold his claim for a new townsite. The "tent city" that sprang up was named after Lt. Emmet Crawford, who had been formerly stationed at Fort Robinson but was killed in Mexico in January 1886. The town's original plat was filed on June 21, 1886 by the Western Townsite Company. E.A. Thompson and William D. Edger (editor of the original Crawford Clipper) circulated a petition for Crawford to become a village, but upon getting only 69 of the 200 needed signatures, secured the remaining signatures from willing soldiers at Fort Robinson. Crawford was incorporated in August 1886.

A second railroad, the Chicago, Burlington and Quincy, reached Crawford in 1889, providing an additional boost to the community. In 1907 Crawford became a city, and by 1911 Crawford had the seventh-most business volume in Nebraska. Through the years Crawford saw many businesses come and go, including a brick works, mica mill, pickle factory, and a Nash Finch Company warehouse. Crawford also lobbied for a state normal school, but the school (now Chadron State College) was established in nearby Chadron due to Crawford's proximity to Fort Robinson. Perhaps the most fascinating Crawford business was the Elite Theater, which was established circa 1910 in a converted saloon. The theater was owned and operated by Mrs. Georgianna Higgins, thought to be the first woman theater owner in the United States.

Crawford's population peaked at 2,536 in 1910, largely because of the Kinkaid Act. However, the population dropped to 1,646 by 1920. The town began slowly growing, however, and the population was 1,845 in 1940. The population has been steadily decreasing since.

In the Lakota language, Crawford is known as oglíyotake otȟúŋwahe, or "Return and Settle City".

There were 470 households of which 21.5% had children under the age of 18 living with them, 41.7% were married couples living together, 7.2% had a female householder with no husband present, 4.0% had a male householder with no wife present, and 47.0% were non-families. 41.9% of all households were made up of individuals and 26% had someone living alone who was 65 years of age or older. The average household size was 2.07 and the average family size was 2.85.

There were 473 households out of which 27.9% had children under the age of 18 living with them, 48.6% were married couples living together, 9.9% had a female householder with no husband present, and 37.6% were non-families. 34.9% of all households were made up of individuals and 20.9% had someone living alone who was 65 years of age or older. The average household size was 2.26 and the average family size was 2.92. 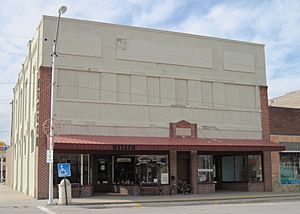 Crawford and its surrounding area include several cultural institutions. Crawford's primary library is the Crawford Public Library. The Crawford Historical Museum contains artifacts and materials relevant to the city's history. Fort Robinson is a state park and National Historic Landmark District several miles west of Crawford that includes two museums and a play theatre. Located south of Crawford, near the ghost town of Belmont, is the Belmont Tunnel. Also, two sites listed on the National Register of Historic Places are within the city limits, the Co-operative Block Building and the US Post Office.

Crawford's city park is located in Northwest Crawford, along the White River. The other park, Peabody Hale Memorial Park, is the location of the city's swimming pool and baseball diamonds. Fort Robinson State Park and the Nebraska National Forest are also local recreational areas. Finally, Crawford has a golfing facility, the Legends Buttes Golf Course. The local rodeo grounds are west of the city park and are the location of a yearly PRCA rodeo.

All content from Kiddle encyclopedia articles (including the article images and facts) can be freely used under Attribution-ShareAlike license, unless stated otherwise. Cite this article:
Crawford, Nebraska Facts for Kids. Kiddle Encyclopedia.