Dinosaucers is a 1987 American-Canadian animated television series co-produced in the United States and Canada, produced by DIC Animation City and distributed in syndication in the US by Coca-Cola Telecommunications. The show was created by producer Michael E. Uslan, who considered it a "hairbrained idea". A total of 65 episodes were made for the show's first-run syndication, but it only lasted one season.

There were originally plans by Galoob to release a Dinosaucers toyline, and prototype figures were produced; however, the line was scrapped after the show was canceled. The toys included Stego, Bronto-Thunder, Allo, Bonehead, Plesio, Quackpot, Ankylo, and Genghis Rex.

In 1989, after Dinosaucers premiered in Brazil, a company named Glasslite contacted Galoob and purchased the molds. As such, Glasslite produced 5 of the 8 unproduced Galoob molds of the 8" figures although they can be extremely hard to find.

There has been long term effort by fan and artist group MasterTurtle Customs to gain partnership with a toy company to help them launch a revived and expanded toy line. They seem to have taken what was done, given it new life and created designs of never made or planned characters.

In 2018, Uslan joined with publisher Lion Forge Comics to revive Dinosaucers as a comic book. The 5-part mini-series was left on a cliff hanger however was discontinued after a trade paperback was published in January 2019.

The show follows the Dinosaucers and their battles against the evil Tyrannos. Each group is composed of intelligent anthropomorphic dinosaurs or other prehistoric saurian species. The Dinosaucers are also allied with four humans known as the Secret Scouts. The two groups originally come from a planet in a counter-Earth orbit known as Reptilon. Most of the characters are named after the type of prehistoric animal they are based on, or some pun of the name.

Both groups have a central base of operations. The Dinosaucers' base is called Lava Dome and is located in a mountain area, in a dormant volcano. The Tyrannos' base is located under a tar pit. Each of the groups' members save for Teryx and Terrible Dactyl–who can themselves fly–have flying ships in which they can travel and do battle. Most ships actually resemble the personae of their respective owners. Along with their individual ships, both groups have a large mothership of sorts as well.

All the Dinosaucers have a button on the front of their uniforms which instantly devolves them to their primitive ancestors dinosaur state, while retaining their intelligence and speech capacity. This special ability is called Dinovolving and initially appeared to be a significant element of the series, as both Allo and Bronto Thunder Dinovolved in the first episode. Despite the apparent technological advantage, most of the later episodes did not feature any Dinovolving. Teryx was the only Dinosaucer who would never Dinovolve throughout the series, while Allo, Tricero, Bonehead and Bronto Thunder would use the ability in more than one episode.

The Tyrannos don't have the secret of Dinovolving, and a few episodes even revolve around their plans to steal the technology somehow. However, they do possess a special raygun called a devolver. Blasting a living creature with this weapon has the same "devolving" effect as Dinovolving, but reduces the victim's intelligence to that of the devolved form. For those from Reptilon the form is that of a normal dinosaur while humans get reverted to primitive cavemen. In any case, the device often winds up being used against them, to much comedic effect, rather than on the Dinosaucers. In this fashion, Genghis Rex, Ankylo, Quackpot and Brachio were all changed into primitive dinosaurs at various times in the series. The Tyrannos also possess a weapon called a "fossilizer", which is capable of turning its target into stone, as well as reversing the condition. The Dinosaucers were also shown to have access to this particular type of weapon in one episode, though it may have been on loan from the Tyrannos, as both factions had united to battle a group of anthropomorphic Sabertooth Tigers, who also hailed from Reptilon. These creatures possessed fossilizers as well, and also had a device which could disrupt the equivalent weapons belonging to the Dinosaucers and Tyrannos while leaving their own in perfect working order.

The Secret Scouts are four teenage humans who help the Dinosaucers as allies. According to the opening credits they met them when they first arrived and gained powers through magic rings they were given. They are some of the closest friends the Dinosaucers have while they are on Earth. 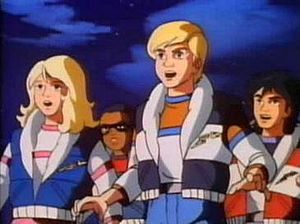 The Secret Scouts. (From left to right) Sara, Paul, Ryan and David 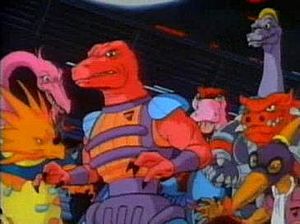 The Tyrannos are the forces of "evil" in the series and, like the Dinosaucers, have a total of 8 members in their group. The picture above does not show Princess Dei, as she does not appear at the presentation of the series and is only introduced later as a means to balance the difference in numbers and power of the two opposing factions.

During the course of the series, Plesio, Terrible Dactyl and Quackpot would all betray Genghis Rex at least once over matters of conscience. Nevertheless, they would eventually return to Rex's side out of loyalty to his cause.

All the episodes are directed by Stephan Martinière.

All content from Kiddle encyclopedia articles (including the article images and facts) can be freely used under Attribution-ShareAlike license, unless stated otherwise. Cite this article:
Dinosaucers Facts for Kids. Kiddle Encyclopedia.