Kids Encyclopedia Facts
Not to be confused with Dis (disambiguation).
This page is about the English town called Diss. For music created for the purpose of verbally attacking others, see diss track.

Diss is a market town and electoral ward in Norfolk, England, close to the border with the neighbouring East Anglian county of Suffolk, with a population of 7,572.(2011) Diss railway station is on the Great Eastern Main Line, which runs from London to Norwich.

The town takes its name from dic an Anglo-Saxon word meaning either ditch or embankment. Diss has a number of historic buildings, including an early 14th century parish church, and a museum.

At the time of Edward the Confessor, Diss was part of the Hartismere hundred (a hundred was an administrative subdivision) of Suffolk, and it was recorded as such in the Domesday book. It is recorded as being in the king's possession as demesne (direct ownership) of the Crown, there being at that time a church and a glebe of 24 acres. This was considered to be worth £15 per annum, which had doubled by the time of William the Conqueror, it being then estimated at £30 with the benefit of the whole hundred and half, belonging to it. It was then found to be a league long, around 3 miles (5 km) and half this distance broad, and paid 4d. in Danegeld. From this it appears that it was still relatively small, but it grew shortly afterwards when it subsumed Watlingsete Manor, a neighbouring area, which was as large as Diss, and seemingly fuller of inhabitants, according to the geld or tax that it paid. This was afterwards called Walcote, and includes part of Heywode, as appears from its joining to Burston, into which town this manor extended.

The whole estate later fell into the hands of the Lordship of the FitzWalters (who were raised to Baron FitzWalters in 1295) and in 1299 the then Lord FitzWalter obtained a charter of confirmation for a fair every year at his manor of Diss, to be held around the feast of Saint Simon and Jude (28 October), and several days after. A grant made in 1298 to William Partekyn of Prilleston (now Billingford) granted, for homage and half a mark of silver, two homesteads in Diss, with liberty of washing his wool and cloths in Diss Meer. This came on the express condition that the gross dye should be washed off first. It seems as if the church of Diss was built by the same Lord, as his arms were cut into the stone of the south porch of the church several times. 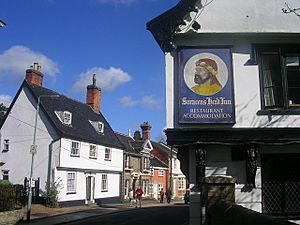 Soon after the Battle of Agincourt in 1415, Edward Plantagenet, Duke of York and Earl of Rutland, came to hold Diss manor, hundred, and market, together with Hemenhale; and the title of Lord FitzWalter became attached to the estate. It was part of a much larger estate that included Hemenhale and Diss manors, with the hundred of Diss in Norfolk, the manors of Shimpling and Thorne in Suffolk, of Wodeham-Walter (now Woodham Walter), Henham, Leiden (now part of Leaden Roding), Vitring, Dunmow Parva (now Little Dunmow), Burnham (possibly equating to the modern village of Burnham-on-Crouch), Winbush, and Shering (now Sheering) in Essex. Shortly afterwards, the estate was acquired by the Ratcliffe family, who inherited the title of Baron FitzWalter. The Ratcliffe family owned the land until at least 1732, styling themselves Viscounts FitzWalter.

Opposite the 14th-century parish church of St. Mary the Virgin stands a 16th-century building known as the Dolphin House. This was one of the most important buildings in the town. Its impressive dressed-oak beams denote it as an important building, possibly a wool merchant's house. Formerly a pub, the Dolphin, from the 1800s to the 1960s, the building now houses a number of small businesses.

Adjacent to Dolphin House is the town's market place, the geographical and social centre of the town. The market is held every Friday (except Good Friday and other holidays, when it is rescheduled to the preceding Thursday): a variety of local traders sell fresh fruit and vegetables, meat, fish and cheeses. The market was first granted a charter by Richard the Lionheart. The town's post office and main shopping street (Mere Street) are also located by the marketplace.

Early in 1871, substantial alterations were made to a house in Mount Street, about 100 yards (100 m) north of the parish church. The workmen were removing the brick flooring of one of the ground floor rooms and excavating the soil beneath, to insert the joists of a boarded floor, when they discovered a hoard of coins. Beneath the bricks, they came upon the original hard clay floor, and in the centre of the room, at about 18 inches (50 cm) from the surface, the remains of an earthen vessel were found, containing over 300 coins. Except for two fine gold nobles, all of the coins were silver.

In March 2006, Diss became the third town in the UK to join Cittaslow, an international organisation promoting the concept of 'Slow Towns'. It has since left this initiative.

The rail journey from London to Diss is the subject of a famous poem by the late Sir John Betjeman,'A Mind's Journey to Diss'. 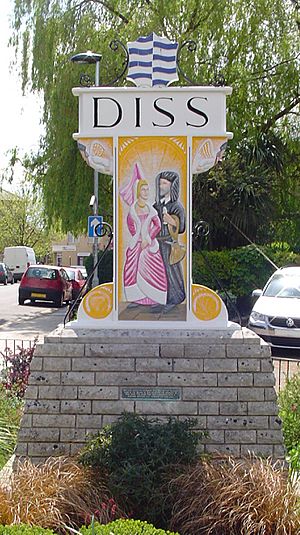 Diss has produced a few national and international sports stars, including footballer Matthew Upson, who played in defence for England and Arsenal amongst others, and Great Britain judo team member Colin Oates.

The local Rugby Union club in Roydon has recently enjoyed a great deal of success having been promoted twice in successive years.

There are two local newspapers serving the town, the Diss Mercury, and the Diss Express which was founded in 1864. There is also a local magazine, Your Local Magazine.

All content from Kiddle encyclopedia articles (including the article images and facts) can be freely used under Attribution-ShareAlike license, unless stated otherwise. Cite this article:
Diss Facts for Kids. Kiddle Encyclopedia.