A Bronze Age mound outside Driffield was excavated in the 19th century, the contents of which are now kept in the British Museum. It includes a knife, a dagger, a beaker and a greenstone wrist-guard all dating to between 2200 and 1500 BC. 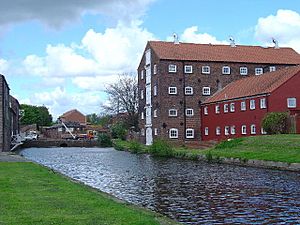 Driffield lies in the Yorkshire Wolds, on the Driffield Navigation (canal), and near the source of the River Hull. Driffield lies on the A614, A166 and B1249, and on the Yorkshire Coast rail line from Scarborough to Hull. It is situated next to Little Driffield, where King Aldfrith of Northumbria was reputedly buried, and is also very close to Nafferton, Hutton Cranswick and Wansford. Driffield is named the Capital of the Wolds, mainly through virtue of its favourable location between Bridlington, Beverley and York.

The town is served by Driffield railway station on the Yorkshire Coast Line.

The place-name 'Driffield' is first attested in the Domesday Book of 1086, and means 'dirty (manured) field'.

Driffield is of Anglo-Saxon origin 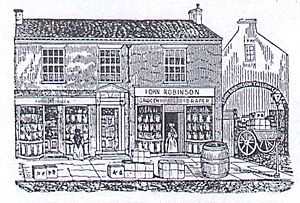 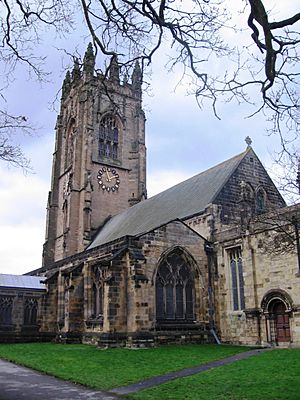 Driffield contains a small community hospital, small fire station, police and ambulance stations, several churches - the largest being All Saints' Parish Church, whose bells were restored for the millennium - and a fairly small high street. There is also an area of parkland close to the parish church alongside the stream (Driffield Beck) that runs roughly parallel to the high street.

The church dedicated to All Saints was designated a Grade I listed building in 1963 and is now recorded in the National Heritage List for England, maintained by Historic England.

The Methodist Church stands on Middle Street North and was built in 1880.

There was a second Anglican Church dedicated to Saint John located on St Johns Road.

Driffield Christian Fellowship is an Elim Pentecostal church who have a building on Wansford Road.

The Congregational Church is situated on Exchange Street.

The Salvation Army have a building on The Mount.

Churches Together In Driffield incorporates all but the Congregational church and they seek to work together for the good of the town of Driffield.

It is also tradition for the townspeople of Driffield to congregate in the market place on New Year's Eve and listen for the church bells ringing in the new year.
Scrambling This age-old tradition is unique to the town of Driffield and has its origins in the 18th century. The event takes place a couple of days into the New Year. Children walk through the main street shouting an ancient rhyme to shopkeepers in return for money and goodies.....The cry is.... "Here we are at our town end...A Bottle of rum and a crown to spend...Are we downhearted?..No!...Shall we win?...Yes!..."

Mick Woodmansey, drummer with David Bowie's band the Spiders (originally called the Hype) from 1970, was born in Victoria Road, Driffield.

The Manchester band Happy Mondays recorded their second album Bummed at the Slaughterhouse, a studio that has since burnt down, in Driffield in 1988.

Driffield was home to one of the finest of English 19th century woodblock colour printers, Benjamin Fawcett, and the artist who worked for him, Alexander Francis Lydon.

The town is twinned with Saint Affrique, France.

The BBC reported that "Driffield couple remarry 57 years after divorce" on 27 January 2011.

Facts from this Wikipedia page were quoted by Viking FM DJ Sean Goldsmith on his Breakfast Show on 16 July 2014.

All content from Kiddle encyclopedia articles (including the article images and facts) can be freely used under Attribution-ShareAlike license, unless stated otherwise. Cite this article:
Driffield Facts for Kids. Kiddle Encyclopedia.