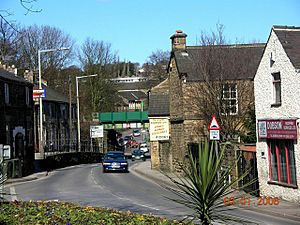 The old Sheffield-Chesterfield road in Dronfield

Dronfield is a town in North East Derbyshire in the North Midlands region of England. It comprises the three communities of Dronfield, Dronfield Woodhouse and Coal Aston. It is sited in the valley of the small River Drone, and lies between the town of Chesterfield and the city of Sheffield. The Peak District National Park lies 3 miles to the west. The town's name means open land infested with drones (male bees).

The town is known to have been in existence prior to the 1086 Domesday Book, and has a 13th-century parish church. In 1662 Charles II granted the town a market, although this later ceased. The industrial history of the town includes coal mining, the wool trade, the production of soap and steel, and engineering. Today a range of manufacturing firms still operate within the town.

Dronfield's population has increased dramatically in post-war years from 6,500 in 1945 to its current size of just over 21,000.

The football ground to the north of the town is currently the home of Sheffield F.C., the world's oldest football club.

Dronfield was in existence before the 1086 Domesday Book, though little is known about its early history. It suffered after the Norman conquest when William the Conqueror sought to bring the North of England under control. Its name derives from the Old English drān and feld, meaning open land infested with drones (male bees).

The Church of St John the Baptist was built by 1135 when Oscot was rector and the parish of Dronfield covered Little Barlow, Coal Aston, Povey, Holmesfield, Apperknowle, Dore and Totley. The Guild of the Blessed Virgin Mary was established in 1349 in the hall of the chantry priests. However, due to the Dissolution of the Monasteries and the subsequent suppression of the guilds and chantries in 1547, it became a local inn which still operates today as the Green Dragon Inn.

During the 16th century Dronfield with its sheep farmers had a significant number of families working in the wool trade, engaged in spinning and weaving and also the production and selling of cloth. Soaper Lane, being next to the river, was the centre of the soap-making and tanning industry in the town, with a dye works also situated there. In 1662 Dronfield was granted a market by Charles II, but in the 18th century, due to the proximity of Sheffield and Chesterfield, the market went into decline and ceased to exist.

Between the 16th and 19th centuries Dronfield grew around various industries, the most widespread of which was coal mining, with pits at Stubley being mentioned in the 16th century and a map of Hill Top in the 17th century showing some workings. Further mines were opened at Coal Aston in 1785 and Carr Lane in Dronfield Woodhouse in 1795. The town also benefited from trade with the lead mining and grindstone industries in the Peak District. The wealth of the Rotheram family, who became the Lords of the Manor of Dronfield, was based on the lead trade.

The Wilson-Cammell steelworks was built in the town in 1872-3, following the completion of the Midland Main Line through the town in April 1869. Bessemer steel was first blown at the site in March 1873 and the plant was soon capable of producing 700 tons - mostly as rails - every week. Dronfield became a boom town, but its prosperity was short-lived; although more efficient and profitable than other works in the Sheffield area, its site had limitations that couldn't compete with low-cost coastal locations, and in 1883 production moved from Dronfield to Workington in west Cumbria. Steelworkers and their families moved too. It is estimated that 1,500 townspeople made the trip to Workington. 'Dronnies', as the people of Workington called the newcomers, formed Workington AFC in 1888.

In 1993 Dronfield Henry Fanshawe School (formerly the 'Dronfield School' and previously 'Dronfield Grammar School') suffered major damage when its 1960s system-built blocks were completely gutted by fire, requiring all firefighting resources from all nearby towns and Sheffield to control the blaze. The historic Victorian quadrangle and library, as well as the sixth-form block, survived. The remains of the modern school were subsequently demolished and mobile cabins were used as classrooms until 1996 when the school was rebuilt. 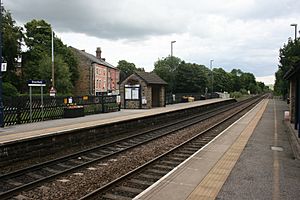 Dronfield is sited in the valley of the River Drone in North East Derbyshire, England. The Drone is a small river that, after flowing through Dronfield, joins the Barlow Brook at Unstone, and then flows into the River Rother at Whittington Moor, Chesterfield.

Dronfield is situated roughly midway between the town of Chesterfield to the south and the city of Sheffield to the north, for which it is a popular commuter town. The A61 trunk road Dronfield–Unstone Bypass cuts through the town, although this is not directly accessible from the town centre itself. Instead a network of secondary roads serves local traffic: the B6054, B6056, B6057 and B6158. Dronfield is also served via rail through Dronfield railway station.

Dronfield covers an area of 3,457 acres (13.99 km2) and has as neighbours the villages and hamlets of Unstone, Holmesfield, Barlow, Apperknowle, Hundall, Marsh Lane and Eckington.

Situated close to the Pennines and many of the beauty spots of Derbyshire, Dronfield also has easy access to the Peak District National Park just 3 miles (4.8 km) away. There are four conservation areas either wholly or partly within Dronfield's parish area: Dronfield (adopted 1971), Coal Aston (1983), Dronfield Woodhouse (1990) and Moss Valley (1990); the first three cover the respective old village centres and are wholly within the parish, whereas Moss Valley covers a mixed landscape and is mostly outside the parish, to the northeast.

Dronfield Woodhouse once claimed to have the largest privately owned housing estate in Europe ("Gosforth Valley") when it was first built in the 1970s. A61 Dronfield–Unstone Bypass was opened running through the western side of the town, to allow easier access for travel between the larger populated areas of Sheffield to the north and Chesterfield to the south. To a certain extent the town is a dormitory community for workers in these settlements. 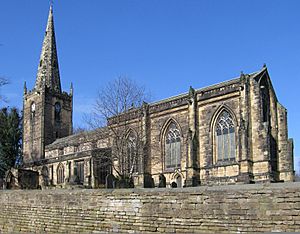 Within Dronfield's civil parish are 42 structures that are listed by Historic England for their historical or architectural interest. One structure - the parish church of St John the Baptist - is listed as Grade I, four structures - Aston End, Chiverton House, Dronfield Woodhouse Hall farmhouse and the building northeast of The Hall on High Street - are Grade II*, and the rest - including Dronfield Manor, the Peel Monument and several buildings in Church Street and High Street - are Grade II.

The parish church of St. John the Baptist dates from the late 13th to 14th century, with mid-16th-century alterations. It has ashlar and coursed rubble walls of coal measures sandstone, with graduated slate and lead roof coverings and an octagonal spire. Repairs were made in about 1819, with more alterations in 1855 and 1916. There are over 120 brasses and monuments, many of which line the floor in the chancel and nave.

Aston End is a medieval house with additions and alterations made in the 16th, 17th and 19th centuries. It is built in an L-plan with coursed rubble walls of coal measures sandstone and a stone slated roof. Chiverton House, originally called Dam Flatt House, dates from between 1692 and 1709 and has a flat symmetrical front with cross windows, a central gable and towers at each end. It was altered in 1712 and the 19th century, though not significantly. The attached boundary walls, gatepiers and railings form part of its listing. Dronfield Woodhouse Hall farmhouse is a late-16th-century house of irregular layout, built from coursed squared coal measures sandstone with a stone slated roof. It was reworked extensively in the early 18th century, with further alterations in the 19th and 20th centuries. The building north-east of The Hall on High Street is a former farm outbuilding that dates from the late 17th century, but it also contains a significant amount of an earlier timber-framed building, possibly a medieval hall. It is built in an L-plan with walls of coursed squared coal measures sandstone and a stone slated roof. In 2004 it was in a poor state of repair and was gifted to the community; in 2015 it was restored and extended at a cost of more than £1.6 million, with over £1.25m provided by the Heritage Lottery Fund. It is now used as a heritage visitor centre and exhibition and community function space, with modern catering and cloakroom facilities. 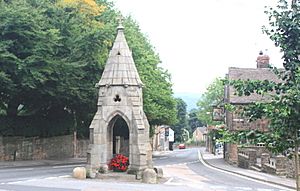 The "Peel Monument", situated on the town's High Street, was built in 1854 out of gritstone as a tribute to Sir Robert Peel, to commemorate his repeal of the Corn Laws in 1846. The monument is very distinctive, and is often portrayed in images of the town. For instance, it is the main device featured on the badge of Dronfield FC.

Near to the Peel Monument on High Street is a 16th-century house known as 'The Cottage'. It is believed that it was once owned by Lord Byron (1788–1824), though there is no proof that he was a Dronfield resident.

Notable events are the annual Dronfield Gala and the Dronfield Woodhouse and Coal Aston well dressings, which are held in July.

Since 1972 Dronfield has been twinned with Sindelfingen in Germany. A park in Dronfield Woodhouse was renamed Sindelfingen Park in the early 1990s to celebrate this partnership. Dronfield Henry Fanshawe School has an annual student exchange with a school in Sindelfingen, which helps establish links between the young people in the two towns.

There is a rugby league side that goes by the name of Dronfield Drifters RLFC.

The leisure centre is next to the civic centre.

The cricket pitch on Stonelow Road is the home of the local Coal Aston Cricket Club. The ground has high-quality facilities including home and away changing rooms, a tea room, an electronic scoreboard, a seating area in front of the pavilion and an astro-turf practice net.

All content from Kiddle encyclopedia articles (including the article images and facts) can be freely used under Attribution-ShareAlike license, unless stated otherwise. Cite this article:
Dronfield Facts for Kids. Kiddle Encyclopedia.