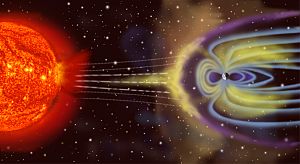 This figure shows the magnetosphere blocking solar wind caused by the sun.

Movement of the north magnetic pole. It is expected to pass near the north geographic pole and continue its path to Siberia

The North Magnetic Pole is the point on the surface of Earth's northern hemisphere where the planet's magnetic field points vertically downwards. There is only one place where this occurs, near to (but distinct from) the Geographic North Pole.

Its southern hemisphere counterpart is the South Magnetic Pole. Since the Earth's magnetic field is not exactly symmetrical, a line drawn from one to the other does not pass through the geometric centre of the Earth.

The Earth's North and South Magnetic Poles are also known as Magnetic Dip Poles, referring to the vertical "dip" of the magnetic field lines at those points.

Earth does change its magnetic poles every million years (plus or minus 250,000 years). Before a change of magnetic field, the Earth's magnetic field becomes weaker and moves around, like a spinning top would before it falls. The Earth has already had hundreds of changes (flip flops). Scientists know this as a result of studies of magnetism on the sea floor, near the mid-Atlantic ridge. The lava slowly moves out of this crevasse (gap in the sea floor) and then it cools with its iron oxide molecules all pointing in the new direction of the Earth's magnetic field. We can look at the history of this magnetic field today to look back at the many flips in the past.

Reversals occur at intervals from less than 0.1 million years to as much as 50 million years. The most recent geomagnetic reversal, called the Brunhes–Matuyama reversal, occurred about 780,000 years ago. Another global reversal of the Earth's field, called the Laschamp event, occurred during the last ice age (41,000 years ago). However, because of its brief duration it is called an "excursion".

Animals which take long migrations may depend on the magnetic field for a guide.

Some migratory animals know their locations by the intensity of the field. They know the time because of circadian rhythms the field produces. Migratory animals are born with a magnetic map in their head that allows them to migrate great distances safely. Their ability to sense the magnetic field is because of magnetic particles. Other animals have a chemical compass based on a radical pair mechanism.

All content from Kiddle encyclopedia articles (including the article images and facts) can be freely used under Attribution-ShareAlike license, unless stated otherwise. Cite this article:
Earth's magnetic field Facts for Kids. Kiddle Encyclopedia.