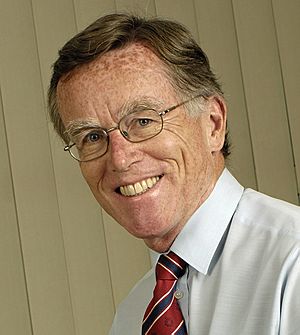 Eduard Jan Bomhoff (born September 30, 1944 in Amsterdam) is a Dutch economist and academic, and also former politician and columnist.

From July till October 2002, he was on behalf of the Pim Fortuyn List (LPF) government minister of Health, Welfare and Sports and also deputy prime minister in the First Balkenende Cabinet.

He is a member of the Old Catholic Church.

All content from Kiddle encyclopedia articles (including the article images and facts) can be freely used under Attribution-ShareAlike license, unless stated otherwise. Cite this article:
Eduard Bomhoff Facts for Kids. Kiddle Encyclopedia.