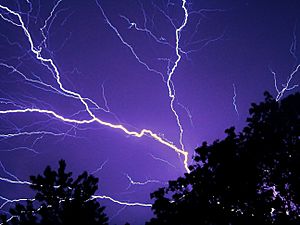 Lightning is an electrostatic discharge that travels between two charged regions.

An electric field is an area where charged particles will feel an electric force. The units used to measure electric fields are newtons per coulomb. Electromagnetism is closely related to both electricity and magnetism because both involve movement of electrons.

A magnetic field is a part of the electric field that only exerts a force on moving charges.

Through electromagnetic induction, a changing magnetic field can produce an electric field. This concept is used to make electric generators, induction motors, and transformers work. Since the two types of fields were dependent on each other, the two are thought to be one. Together they are called the electromagnetic field.

A photon is an elementary particle. It is the particle that light is made up of. Photons also make up all other types of electromagnetic radiation such as gamma rays, X-rays, and UV rays. The idea of photons was thought up by Einstein. Using his theory for the photoelectric effect, Einstein said that light existed in small "packets" or parcels which he called photons.

Photons have energy and momentum. When two electromagnetic fields act on each other, they switch photons. So photons carry the electromagnetic force between charged objects. Photons are also known as messenger particles in physics because these particles often carry messages between objects. Photons send messages saying "come closer" or "go away" depending on the charges of the objects that are being looked at. If a force exists while time passes, then photons are being exchanged during that time.

All content from Kiddle encyclopedia articles (including the article images and facts) can be freely used under Attribution-ShareAlike license, unless stated otherwise. Cite this article:
Electromagnetism Facts for Kids. Kiddle Encyclopedia.