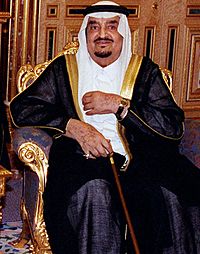 King Fahd bin Abdul Aziz Al Saud, Custodian of the Two Holy Mosques, (1921 - August 1, 2005) was the King of the Kingdom of Saudi Arabia. He was also the leader of the House of Saud and Prime Minister. One of his sons was Abdul Aziz bin Fahd.

All content from Kiddle encyclopedia articles (including the article images and facts) can be freely used under Attribution-ShareAlike license, unless stated otherwise. Cite this article:
Fahd of Saudi Arabia Facts for Kids. Kiddle Encyclopedia.