Kids Encyclopedia Facts
This page is about the suburb of Bristol, England. For other uses, see Fishponds (disambiguation).

Fishponds is a large suburb in the north-east of the English city of Bristol, about 3 miles (5 km) from the city centre. It has two large Victorian-era parks: Eastville Park and Vassall's Park (once the Vassall Family estate, also known as Oldbury Court). The River Frome runs through both with the Frome Valley Walkway alongside it. A restored mill found at Snuff Mills near the Vassall's Park end of the river has kept its original waterwheel, which can still be seen and heard turning. Eastville Park has a large boating lake with central wildlife reserves. Fishponds is mainly residential. Two main bus routes pass through. Housing is typically terraced Victorian. The high street shops include an international supermarket, Asian food store, charity shops, takeaways and Lidl, Aldi and Morrisons supermarkets. It has a small student population from the presence of the Glenside campus of the University of the West of England. The name Fishponds derives from when it was a quarry district, like nearby Soundwell. The empty quarries became large fishponds, which have since been filled in. One remained until the mid-1970s, when it was officially closed: a popular swimming area named "The Lido" by locals. It now belongs to an angling club. 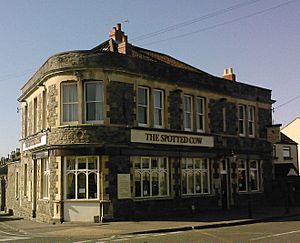 There are currently sixteen pubs in Fishponds, most of which date from the Victorian era. Two are modern conversions; the Old Post Office, and the VanDyke, built as a 1200 seat cinema in 1926, it closed in 1973. The Star (built 1853), was formerly the headquarters of Bristol Rovers football club when they played as the Black Arabs in the 1890s. Others include the Farriers Arms, now closed and boarded up (built 1872), Railway Tavern (built 1867), Fishponds Tavern, now converted to two houses (built 1904), Full Moon, now the New Moon (built 1850), Golden Lion (built 1883), Cross Keys now closed (built 1853), Cross Hands (built 1853), Old Tavern now closed (built 1899), Greyhound (built 1883), Spotted Cow (built 1883), Portcullis (built 1853), the Warwick Arms (built 1906), and the Oldbury Court (built 1957). Most are along the Fishponds Road running from Downend and Staple Hill to the north down towards Eastville to the south. 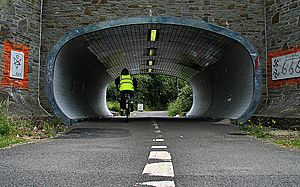 Fishponds railway station opened in 1866 and closed in 1965. It included a shunting line for Fishponds-built locomotives of the Avonside Locomotive Works to join the main line. The Bristol & Bath Railway Path now runs down the old line, and can be accessed at several points in Fishponds. The Bristol Tramway operated from Old Market to Fishponds tram terminus from 1897 to 1941. The suburb, like most of eastern Bristol, is currently not served by rail. The two nearest stations are Stapleton Road and Filton Abbey. The reopening of the Henbury loop line will include reopening two railway stations in north Bristol: Henbury and North Filton. The latter will be a short distance west of Fishponds. 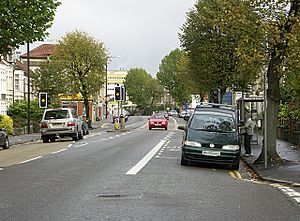 The area of Fishponds was once covered by the Royal Forest of Kingswood. The forest was progressively reduced and developed over the centuries, with Fishponds first recorded as the "Newe Pooles" in 1610, and subsequently "Fish Ponds" by 1734. By the 17th century it was thriving village with numerous stone built cottages for miners and quarrymen who quarried for coal and pennant stone. The village grew up around the two pools formed from the old quarries, but both were filled in by 1839.

Fishponds has been the site for several metal foundries, including George Adlam & Sons founded in the 1830s and Parnall & Sons, who had a foundry and scale works in Fishponds and undertook manufacture of weights, measures and shop fittings. The company would later go on to fit out ocean liner passenger compartments on the RMS Britannic in 1929 and the famous QE2 in the 1960s.

The railway was built through Fishponds in 1835, and later included a shunting line for Fishponds built locomotives of the Avonside Locomotive Works to join the main line. Peckett and Sons also built locomotives at the Atlas Works towards Speedwell, whose engines joined the line at Clay Hill until the company closed in 1961.

From 1894 Palmer Bros biscuit and cake manufacturers operated on two sites on Fishponds Road, including the factory which is now part of the City Glass Company. Webers chocolates on Goodneston Road was opened in 1914 and produced chocolates for 50 years, having had production lines alongside Oerlikon 20mm cannons during World War II.

Straker-Squire opened a large factory on Lodge Causeway in 1907, and was a major producer of early London Buses, with the factory in Fishponds supplying 70% of market by 1909. The company also produced trucks and successfully raced a number of its own car designs, including the 2.8 litre 15, dubbed 'PDQ' (Pretty Damn Quick), which on 25 October 1910 took the 15 hp (11 kW) flying mile record at Brooklands at 95.54 miles per hour (153.76 km/h). The company moved to London in 1919.

The aeronautical industry first came to Fishponds in 1914 when Brazil Straker on Lodge Causeway began building Rolls Royce aircraft engines for the RFC in World War I. Cosmos Engineering bought the firm and Roy Fedden designed the Cosmos Mercury engine before the company was forced into bankruptcy and subsequently taken over by the Bristol Aeroplane Company in 1920. The site was subsequently acquired by Parnall & Sons who from 1941 produced aircraft components for a range of RAF aircraft including wings for De Havilland Tiger Moths and fuselages for Short Stirling bombers. Post war, Parnall & Sons continued manufacturing aircraft interiors and fuselages until about 1960. Today, Diamonite Aircraft Furnishings on Goodneston Road is supplying some of the worlds best aircraft interiors, including that for the Russian President Vladimir Putin.

E. S. & A. Robinson opened a very large cardboard box factory at Filwood Road in 1922. A subsidiary, the Robinson's Waxed Paper Co. Ltd, built a new factory across the road in 1929. In World War II the company produced aircraft components for the Bristol Aeroplane Company. Robinson's merged to become the Dickson Robinson Group in 1966 and finally closed in 1996. The two sites are now owned by Graphic Packaging and Zanetti & Bailey stone and marble masons, whose products and floors can be found in airports, shops and railway stations throughout the UK.

The outskirts of Fishponds to the south comprise Chester Park and Mayfield Park. Fishponds is bordered by five suburbs: Downend, Staple Hill, St. George, Eastville and Stapleton. At the 2011 census the Greater Fishponds area had a population of 37,575.

All content from Kiddle encyclopedia articles (including the article images and facts) can be freely used under Attribution-ShareAlike license, unless stated otherwise. Cite this article:
Fishponds Facts for Kids. Kiddle Encyclopedia.