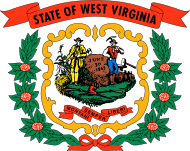 The coat of arms of West Virginia, as stylized in the center of the present state flag.

The state's coat of arms in the center of the flag symbolizes the principal pursuits and resources of West Virginia. In the center is an ivy-draped boulder that has been inscribed "June 20, 1863," the date of West Virginia's admission to the Union as a state. In front of the boulder lie two crossed hunting rifles and a Phrygian cap (or "Cap of Liberty") to illustrate the importance of the state's fight for liberty. Two men, a farmer and a miner, stand on either side of the boulder and represent agriculture and industry. The farmer stands on the left with an ax and plow before a cornstalk. The miner stands on the right with a pickax and, behind him, an anvil and sledge hammer. 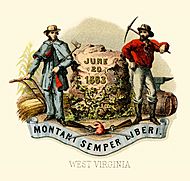 An 1876 rendering of West Virginia's coat of arms, based upon the state seal.

Prior to the adoption of the current state flag of West Virginia, the state had been represented by a number of flags since attaining statehood in 1863, all of which proved impractical. The first West Virginia Legislature commissioned Joseph H. Diss Debar of Doddridge County to design the Great Seal of West Virginia in 1863. On September 26, 1863, the West Virginia Legislature officially adopted the seal designed by Diss Debar, a stylized version of which was also designated the state's coat of arms. Despite the adoption of an official seal, the state did not decide upon an official state flag until 1905.

Prior to West Virginia's separation from Virginia on June 20, 1863, pro-Union supporters in western Virginia created unique flags to show their support for the Union cause. In January 1861, the residents of Kingwood erected a flagpole measuring about 105 feet (32 m) in height, and on it they hoisted a handmade streamer with the word "UNION" prior to Virginia's secession. During the war, western Virginia regiments in the Union Army carried flags handmade by supportive women, as was the case with the Fifth Regiment Virginia Volunteer Infantry who carried a flag bearing the legend "5th Va. Regiment" in 1861. 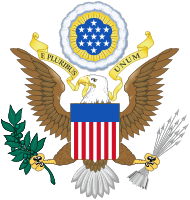 A version of the United States national emblem was painted on the reverse of flags carried by West Virginia regiments during the American Civil War.

In January 1864, the West Virginia Legislature approved a flag for the Fourth Regiment West Virginia Volunteer Infantry to acknowledge the regiment's battles at Charleston, Vicksburg, Jackson, and Missionary Ridge, all four of which were listed on the flag. This was the first among many battle flags to represent West Virginia after statehood which were utilized by soldiers of West Virginia regiments throughout the war. State battle flags were presented to each of West Virginia's Union regiments during the course of the war. These early state flags were squares of silk cloth measuring 6 feet (1.8 m), and were dark blue and trimmed with golden fringe. The obverse side of these flags were painted with the state's newly minted seal within an oval, along with the name of the respective West Virginia regiment and the names and dates of the battles in which they had participated. On the reverse side, the United States national emblem was painted and consisted of a bald eagle with its wings outstretched, clutching a bundle of 13 arrows in its right talon and an olive branch in its left, and a tricolor shield placed across its breast. In its beak, the eagle clutched a scroll with the national Latin motto E pluribus unum (English: "Out of Many, One"). Following the conclusion of the American Civil War, the state of West Virginia had no official flag, and the matter was not taken up until the early 20th century.

The need for an official state flag arose in 1904 when the West Virginia State Commission to the Louisiana Purchase Exposition in St. Louis reported that the state required a flag or ensign to represent and distinguish itself among the other U.S. states at the exposition. In lieu of an official state flag, the commission adopted and used a state flag of its own design at the West Virginia building at the exposition, which was a "sprig of mountain laurel upon an immaculate white field with a pale blue border".

In its report to the West Virginia Legislature, the West Virginia State Commission recommended the adoption of their flag design as the official state flag. On February 24, 1905, the West Virginia Legislature ratified the commission's flag design following its passage of Joint Resolution Number 16 during the gubernatorial administration of Albert B. White. The legislature adopted the commission's flag design, with the addition of a fringe or border of carmine red. The state flag was approved by the legislature to be employed on occasions where a special display of the state's individuality was necessary or regarded as appropriate. According to the 1905 joint resolution:

Said state flag shall be in length and breadth in the proportion of nine to thirteen, this being the same as the flag of the great American Republic of which West Virginia forms a part; the field thereof shall be pure white, upon the center of which shall be a sprig of the rhododendron maximum or "big laurel," having flowers and leaves; and on the reverse side shall be the state coat-of-arms and the motto; the field of pure white shall be bordered by a band or strip of blue, and this in turn shall be bordered by a strip of fringe of carmine red; and said flag shall be regarded and used as the West Virginia state flag on all occasions where a special display of the state's individuality shall become necessary, or be regarded as appropriate.

Following its formal adoption by the legislature, schools and other institutions throughout West Virginia began flying the new state flag. The teachers and students at the schools in Ronceverte purchased the new state flag in June 1906, which measured 5.5 feet (1.7 m) in length, and used it along with the United States flag for salutes and patriotic exercises. 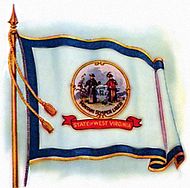 By 1907, the West Virginia Legislature found the 1905 state flag design to be completely unfeasible due to the lettering on one side reading toward the staff, and the differing colors on each respective side showing through the opposite side of the flag's white field of cloth. The state legislature found that this destroyed "the distinctive features of the banner and leaving the state without a prescribed official flag". The West Virginia Legislature sought to remedy the state flag's design flaws in 1907 so that the state could be properly represented at the Jamestown Exposition in Norfolk. On February 25, 1907, during the administration of Governor William M. O. Dawson, the West Virginia Legislature passed Joint Resolution 2, which amended the flag by removing the seal and motto from the reverse side and changing the color of the bordering fringe from carmine red to old gold. Instead of the seal and motto, the reverse of the flag was changed to consist of "a spring or sprig of the rhododendron maximum". According to the 1907 joint resolution:

Said state flag shall be in length and breadth in proportion the same as the flag of the great American Republic of which West Virginia forms a part; the field thereof shall be pure white, upon the center of which on the observe side shall be the great seal or coat of arms of the state, beneath which shall appear the legend "State of West Virginia," in a scroll; on the reverse side shall appear a sprig or sprigs of the rhododendron maximum, or big laurel, our state flower, having blossoms and leaves; the field of pure white shall be bordered by a band or strip of blue, and this in turn shall be bordered by a strip or fringe of old gold; and said flag shall be regarded and used as the West Virginia state flag on all occasions where a special display of the state's individuality shall become necessary, or be regarded as appropriate.

In 2001, the North American Vexillological Association surveyed its members and other flag enthusiasts on the designs of the 72 U.S. state, U.S. territorial, and Canadian provincial flags. Members ranked the West Virginia state flag at 51 out of the 72 flags surveyed. U.S. state flags with state seals on solid-color fields, like the West Virginia state flag, proved unpopular in the survey. 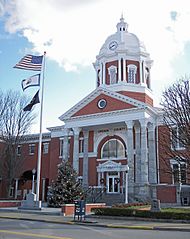 The United States and West Virginia state flags flying together in front of City Hall in Thomas (top) and in front of the Upshur County Courthouse in Buckhannon (bottom). 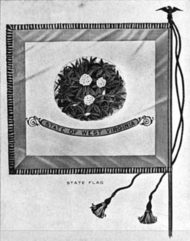 According to West Virginia state law, the desecration of either the flag of the United States or the West Virginia state flag is an offense punishable as a misdemeanor and upon conviction, a guilty verdict can result in a fine “not less than five nor more than one hundred dollars,” or confinement in jail “for a period not exceeding thirty days” at “the discretion of the court or justice trying the case.”

However, such laws are unenforceable as the United States Supreme Court in Texas v. Johnson, 491 U.S. 397 (1989), and reaffirmed in U.S. v. Eichman, 496 U.S. 310 (1990), has ruled that due to the First Amendment to the United States Constitution, it is unconstitutional for a government (whether federal, state, or municipality) to prohibit the desecration of a flag, due to its status as "symbolic speech."

On February 8, 1977, the office of the Secretary of State of West Virginia unanimously adopted the “Pledge of Allegiance to the West Virginia State Flag.” The motion to adopt the pledge was made by Charles S. Smith and seconded by Carol J. Calvert. The pledge reads as follows:

I pledge allegiance to the flag of West Virginia, which serves as a constant reminder that "Mountaineers Are Always Free," which stands as a symbol of her majestic mountains, fertile forests, rich veins of coal, and the pride of her people.

All content from Kiddle encyclopedia articles (including the article images and facts) can be freely used under Attribution-ShareAlike license, unless stated otherwise. Cite this article:
Flag of West Virginia Facts for Kids. Kiddle Encyclopedia.