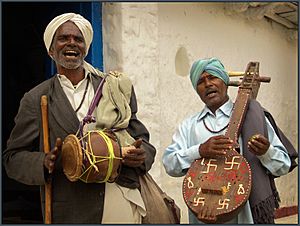 Indians always distinguished between classical and folk music, though in the past even classical Indian music used to rely on the unwritten transmission of repertoire.

Folk music is music that is played or sung by ordinary people (not professional musicians). It is traditional music that people learn by listening to other people playing it and then copying them. We say that the tradition is “orally transmitted” or “handed down orally”, meaning that the music is not written down but taught by speaking (“oral” means “belonging to the mouth”). Every country has its own traditional music. Folk song is part of folk music. A folksinger is a person who sings folk songs.

In the 1960s a new type of music was started by a book Bob Dylan who mixed traditional folk song with rock and roll. This music is sometimes called “folk rock” .

Folk music is music for everybody to play and listen to. In this way it is different from classical music which is mainly developed by professional musicians for a smaller group of people. Folk music is part of a popular culture, although the term “popular music” or “pop music” today refers to a kind of music which people can hear through television, radio and other means of recording.

In many parts of the world nearly all music is folk music. The term “folk music” is usually used for European and American music which is part of an oral tradition. Folk music as an oral tradition, is much less important than before, in part because of new technology (radio, television etc, and recordings of music ). Folk tunes are now often written down, and they have influenced other kinds of music, so that the differences between various types of music are harder to see. 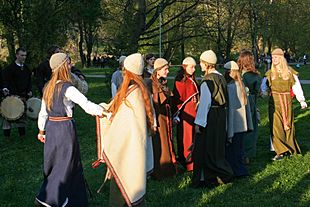 A folklore group from Lithuania singing and dancing 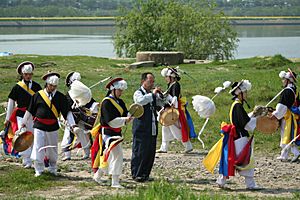 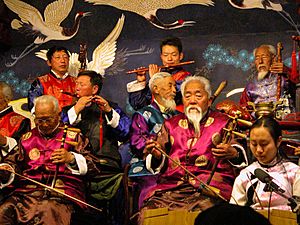 In older times folk music was part of “communal recreation”. This means that small communities such as villages or families would relax by playing and singing music together. People would often make up a new song or new piece of music, or make changes to music that they already knew. In this way music was always changing. People would get musical ideas from other groups nearby. This is why folk music from neighbouring countries often sound similar.

Ballads were a popular kind of folk music. These were folk songs which told a story (they were “narrative”). Sometimes they had a refrain after each verse so that everybody could join in. Ballads told stories of love, myths or folklore. This is how stories were handed down from one generation to another.

Instrumental folk music was used for dancing. Some of the instruments may have been very simple, such as a pair of sticks, rattle or a simple drum. Other instruments may include fiddle (the folk word for “violin”), bagpipes, harp, zither, or various wind instruments, depending on the time of history and the country.

Some singing was polyphonic, i.e. there were two or more parts (voices). Very often two voices would sing in parallel (going up and down together). In countries such as Russia people sang in three or four parts, e.g. in the tradition of “podgolosnaya” (“underneath the voice”). In countries such as Britain this polyphonic tradition did not exist. Folk songs there were sung by one singer, unaccompanied.

Folk music used different scales. These are called modes. The Ionian mode (like our major scale) was the most common in Western Europe. In some parts of Eastern Europe modes with several semitones were used, but for the most part, half steps were avoided. This results is the tunes being described as tetratonic (four notes per octave) or pentatonic (five notes per octave). 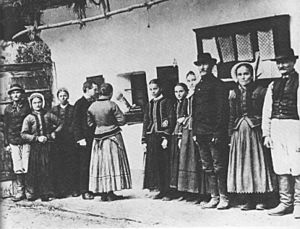 In the 18th century folk music started to have an influence on classical music (or “art music”). People from the higher classes started to be interested in folk music because they were conscious of being part of a tradition. Composers such as Mozart and Schubert wrote folk dances for orchestras or small groups of instruments.

Folk music was used by many composers in the Romantic period. Gustav Mahler used folk song in a lot of his music. In the early twentieth century some composers travelled around collecting folk music which was being played or sung by people in the country. They often used some of these ideas in their music. Bartok did this in Hungary as well as in Bulgaria and in the United States, and people such as Cecil Sharp and the composer Ralph Vaughan Williams collected folk music in England. In the United States the influence of jazz on classical music is all part of the story of folk music.

All content from Kiddle encyclopedia articles (including the article images and facts) can be freely used under Attribution-ShareAlike license, unless stated otherwise. Cite this article:
Folk music Facts for Kids. Kiddle Encyclopedia.