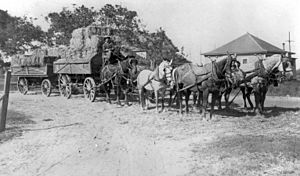 The area encompassing Fountain Valley was originally inhabited by the Tongva people. European settlement of the area began when Manuel Nieto was granted the land for Rancho Los Nietos, which encompassed over 300,000 acres (1,200 km2), including present-day Fountain Valley. Control of the land was subsequently transferred to Mexico upon independence from Spain, and then to the United States as part of the Treaty of Guadalupe Hidalgo.

The city was incorporated in 1957, before which it was known as Talbert (also as Gospel Swamps by residents). The name of Fountain Valley refers to the very high water table in the area at the time the name was chosen, and the many corresponding artesian wells in the area. Early settlers constructed drainage canals to make the land usable for agriculture, which remained the dominant use of land until the 1960s, when construction of large housing tracts accelerated. The first mayor of Fountain Valley was James Kanno, who with this appointment became the first Japanese-American mayor of a mainland United States city.

After the Fall of Saigon in 1975, there was a large influx of Vietnamese refugees settling in Fountain Valley, especially in the late 1970s and throughout the 1980s, forming a large percentage of Asian Americans in the city.

The city is located southwest and northeast of the San Diego Freeway (Interstate 405), which diagonally bisects the city, and is surrounded by Huntington Beach on the south and west, Westminster and Garden Grove on the north, Santa Ana on the northeast, and Costa Mesa on the southeast. Its eastern border is the Santa Ana River.

The city also has 18 churches, one Reform synagogue, a mosque and a public library.

Fountain Valley holds an annual Summerfest in June in Mile Square Regional Park. This event has a car show, rides, music, and booths.

In addition to the San Diego Freeway, which bisects the city, Fountain Valley is served by several bus lines operated by the Orange County Transportation Authority. Bus routes 33, 35, 37, 70, 72, 74, and 172 cover the city's major streets.

According to the 2010 United States Census, Fountain Valley had a median household income of $81,212, with 6.7% of the population living below the federal poverty line.

There were 18,162 households out of which 34.3% had children under the age of 18 living with them, 63.4% were married couples living together, 10.5% had a female householder with no husband present, and 21.7% were non-families. 16.0% of all households were made up of individuals and 5.5% had someone living alone who was 65 years of age or older. The average household size was 3.00 and the average family size was 3.35.

All content from Kiddle encyclopedia articles (including the article images and facts) can be freely used under Attribution-ShareAlike license, unless stated otherwise. Cite this article:
Fountain Valley, California Facts for Kids. Kiddle Encyclopedia.