Francisco Suárez of Toledo Vázquez of Utiel and González of the Tower, known like Doctor Eximius (Granada, 5 January 1548-Lisbon, 25 September 1617), went a theologian, philosopher and jurist jesuita Spanish. One of the main figures of the movement of the Philosofic School of Salamanca, was considered one of the best scholastic

His work considers a turning point in the history of Segundo escolasticismo, that marks the transition of the Renaissance to the modern philosophy. According to Christopher Shields and Daniel Schwartz, "figures so distinct between yes in the place, the time and the philosophical orientation like Leibniz, Grocio, Pufendorf, Schopenhauer and Heidegger found reasons to quote it like source of inspiration and influence 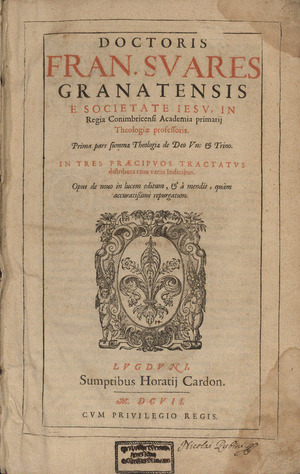 All content from Kiddle encyclopedia articles (including the article images and facts) can be freely used under Attribution-ShareAlike license, unless stated otherwise. Cite this article:
Francisco Suárez Facts for Kids. Kiddle Encyclopedia.