The geography of Puerto Rico consists of an archipelago located between the Caribbean Sea and the North Atlantic Ocean, east of the Dominican Republic and west of the Virgin Islands. The main island of Puerto Rico is the smallest and most eastern of the Greater Antilles. With an area of 3,515 square miles (9,104 km2), it is the third largest island in the United States and the 82nd largest island in the world. Various smaller islands and cays, including Vieques, Culebra, Mona, Desecheo, and Caja de Muertos comprise the remainder of the archipelago with only Culebra and Vieques being inhabited year-round. Mona is uninhabited through large parts of the year except for employees of the Puerto Rico Department of Natural Resources.

The mainland measures some 96 nautical miles (110.5 mi; 177.8 km) by 35 nautical miles (40.3 mi; 64.8 km), an area slightly less than three times the size of the U.S. state of Rhode Island. It is mostly mountainous with large coastal areas in the north and south regions of the island. Some popular beaches on the north-west side of the island are Jobos Beach, Maria's Beach, Domes Beach and Sandy Beach. The main mountainous range is called La Cordillera Central (The Central Range). The highest elevation point of Puerto Rico, Cerro de Punta (4,390 feet or 1,338 meters), is located in this range. Another important peak is El Yunque, located in the Sierra de Luquillo at the El Yunque National Forest, with a maximum elevation of 3,494 feet (1,065 m). The capital, San Juan, is located on the main island's north coast.

The archipelago of Puerto Rico is located between the Caribbean Sea and the North Atlantic Ocean, east of the Dominican Republic and west of the Virgin Islands. Located in the northeastern Caribbean Sea, Puerto Rico was key to the Spanish Empire since the early years of exploration, conquest and colonization of the New World.

The topography of the main island is divided into three major regions: the mountainous region, which includes the Cordillera Central, Sierra de Luquillo, Sierra de Cayey and Sierra Bermeja, the coastal plains and the northern karst region. The Cordillera Central extends through the entire island, dividing it into the northern and southern region. The mountain region accounts for approximately 60% of the land area.

The archipelago of Culebra, located east of Puerto Rico, north of Vieques, and west of the Virgin Islands, is composed of the main island of Culebra and 28 uninhabited islets. Mainly mountainous, the island of Culebra possesses renowned beaches.

Located in the tropics, Puerto Rico enjoys an average temperature of 27 °C (80.6 °F) throughout the year. The seasons do not change very drastically. The temperature in the south is usually a few degrees higher than the north and temperatures in the central interior mountains are always cooler than the rest of the island. The highest temperature record was in the Town of San German with 105 °F (41 °C) and the minimum registration is 39 °F (4 °C) in Aibonito. The dry season spans from November to May while the wet season coincides with the Atlantic hurricane season from June to November. 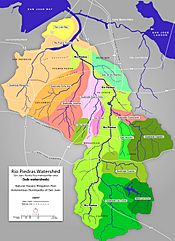 Puerto Rico has lakes (none of them natural) and more than 50 rivers. Most of these rivers are born in the Cordillera Central, Puerto Rico's principal mountain range located across the center of the island. The rivers in the north of the island are bigger and with higher flow capacity than those of the south. The south is thus drier and hotter than the north. These rivers make up 60 watersheds throughout the island, where over 95% of the runoff goes back to sea.

Map of the ecosystems of Puerto Rico

As of 1998, 239 plants, 16 birds and 39 amphibians/reptiles have been discovered that are endemic to the archipelago of Puerto Rico. The majority of these (234, 12 and 33 respectively) are found on the main island. The most recognizable endemic species and a symbol of Puerto Rican pride are the coquís (Eleutherodactylus spp.), small frogs easily recognized by the sound from which they get their name. El Yunque National Forest, a tropical rainforest, is home to the majority (13 of 16) of species of coquí. It is also home to more than 240 plants, 26 of which are endemic, and 50 bird species, including the critically endangered Puerto Rican amazon (Amazona vittata).

Forests of Puerto Rico are well represented by the flora of the Luquillo Experimental Forest (LEF), a Long Term Ecological Research Network site managed by the United States Forest Service and University of Puerto Rico. At this site, there are four main life zones, delineated on the basis of temperature and precipitation (Holdridge System), in the Luquillo Mountains: subtropical wet and subtropical rain forests are found at low and mid elevations, lower montane rain and lower montane wet forests at high elevations. There is also an area of subtropical moist forest at low elevations on the southwest slope.

Tabonuco forest, so named for the dominant tabonuco tree (Dacryodes excelsa), covers lower slopes to about 600 m (2,000 ft). In well-developed stands the larger trees exceed 30 m (98 ft) in height, there is a fairly continuous canopy at 20 m (66 ft), and the shaded understory is moderately dense. Tabonuco trees are especially large on ridges, where they are firmly rooted in the rocky substrate and connected by root grafts with each other. There are about 168 tree species in the tabonuco forest.

The Colorado forest, named for the large Colorado tree (Cyrilla racemiflora), begins above the tabonuco forest and extends up to about 900 m (3,000 ft). Its canopy reaches only about 15 m (49 ft). Soils are saturated and root mats above the soil are common. There are some 53 tree species in this forest type. At this same elevation, but in especially steep and wet areas, is palm forest, heavily dominated by the sierra palm (Prestoea montana). Patches of palm forest are also found in saturated riparian areas in the tabonuco forest. The palm forest reaches about 15 m in height.

At the highest elevations is dwarf forest, a dense forest as short as 3 m (9.8 ft), on saturated soils. Here the trees are covered with epiphytic mosses and vascular plants, especially bromeliads, and these also cover large areas of the ground. Ascending the Luquillo Mountains through these forest types, the average tree height and diameter, number of tree species, and basal area (cross sectional area of tree stems) tend to decrease, while stem density increases.

There are more than 89 tree species in the LEF. The most common are Prestoea acuminata, Casearia arborea, Dacryodes excelsa, Manilkara bidentata, Inga laurina, and Sloanea berteroana. Common shrub species are Palicourea croceoides, Psychotria berteriana, and Piper glabrescens. Grasses, ferns, and forbs are frequent on the ground, especially in canopy gaps; epiphytes are fairly common, and vines are uncommon.

Mario Javier Fernandez-Vega is a Puerto Rican forester who uses silvicultural techniques. Fernandez is currently developing cutting edge forestry methods known as the "Borincano Model". The model capitalizes on the diversity of ecological niches in Puerto Rican forests and native disturbance regimes to formulate practices uniquely suited to the forests of the territory. About his model Fernandez has been known to comment, "Soy de aquí como el coquí" I am from here just like the coqui, a common patriotic axiom that is used to demonstrate their native ties to the island. It should be noted, although incorrect, many believe that the Coqui and its unique vocalizations are indigenous to the island of Puerto Rico. In fact however, there are thriving populations of Coquis that,like the people of Puerto Rico,have been transported to the island of Hawaii. Sadly, the Coqui a source of pride to its people, is viewed as an ecological menace in Hawaii where its song of co kee co kee is found to be an irritant by many. Needless to say that efforts to eradicate its presence in Hawaii is not a popular issue among Puerto Ricans.

Puerto Rico is mostly mountainous with large coastal areas in the north and south. The main mountain range is called "La Cordillera Central" (The Central Range). The highest elevation in Puerto Rico, Cerro de Punta 1,339 meters (4,393 ft), is located in this range. Another important peak is El Yunque, one of the highest in the Sierra de Luquillo at the El Yunque National Forest, with an elevation of 1,065 m (3,494 ft).

Puerto Rico is composed of Cretaceous to Eocene volcanic and plutonic rocks, which are overlain by younger Oligocene to recent carbonates and other sedimentary rocks. Most of the caverns and karst topography on the island occurs in the northern Oligocene to recent carbonates. The oldest rocks are approximately 190 million years old (Jurassic) and are located at Sierra Bermeja in the southwest part of the island. These rocks may represent part of the oceanic crust and are believed to come from the Pacific Ocean realm. Puerto Rico lies at the boundary between the Caribbean and North American plates. This means that it is currently being deformed by the tectonic stresses caused by the interaction of these plates. These stresses may cause earthquakes and tsunamis. These seismic events, along with landslides, represent some of the most dangerous geologic hazards in the island and in the northeastern Caribbean. The most recent major earthquake occurred on October 11, 1918, with seismic moment estimated at 7.5 on the moment magnitude scale. It originated off the coast of Aguadilla and was accompanied by a tsunami.

As an unincorporated territory of the United States, Puerto Rico does not have any first-order administrative divisions as defined by the U.S. Government, but there are 78 municipalities at the second level. Municipalities are further subdivided into barrios, and those into sectors. Each municipality has a mayor and a municipal legislature elected for a 4-year term.

All content from Kiddle encyclopedia articles (including the article images and facts) can be freely used under Attribution-ShareAlike license, unless stated otherwise. Cite this article:
Geography of Puerto Rico Facts for Kids. Kiddle Encyclopedia.