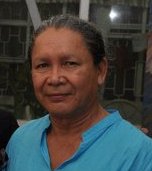 George Simon (23 April 1947 – 15 July 2020) was a Guyanese artist and archaeologist. He was the founder and mentor of the Lokono Artists Group, a group of Lokono artists from Guyana. He was seen as one of the leading Guyanese artists. His paintings (acrylic on canvas, paper or twill fabric) are known for their explorations of Amerindian culture and the Guyanese environment.

All content from Kiddle encyclopedia articles (including the article images and facts) can be freely used under Attribution-ShareAlike license, unless stated otherwise. Cite this article:
George Simon (artist) Facts for Kids. Kiddle Encyclopedia.