German car number plates (Kfz-Kennzeichen) show the place where the car carrying them is registered. When a person changes their main home in Germany, or buys a new car, they must buy new number plates.

Number plates can be bought which are valid all year round or between 2 to 11 months within any 12 months. This allows changing between summer and winter cars, such as a convertible and a sedan/saloon without having the time and money wasted for de- and re-registering.

The pre-1994 German number plate format (DIN-style), no longer issued but sometimes still in use. 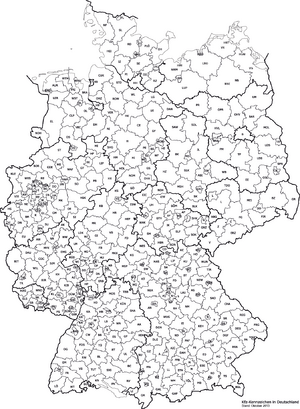 Map of license plates in Germany

The present number plate format, used since 1994, uses black print on a white background and first provides information about the country where the car is registered within the European Union. German licence plates show a D (for Deutschland=Germany) on the blue strip on the left, which shows the European Union's flag, 12 golden stars in a circle on blue ground.

The number of letters in the city/region code usually shows the size and location of the district: the largest German cities generally only have one letter codes (B=Berlin, M=München (Munich), K=Köln (Cologne), F=Frankfurt am Main), most other districts in Germany have two or three letter codes. Districts in eastern Germany usually have more letters, for two reasons:

This is only a rule of thumb, there are a number of exceptions e.g. Germany's second largest city Hamburg (HH, Hansestadt Hamburg, because of its historical membership in the Hanseatic League) or the west German district Ammerland (WST, Westerstede is the capital of the district).

The reason for this scheme is however not to display size or location, but simply to have enough combinations available within the maximum length of eight characters per plate.

After the location name there are the emission test and vehicle safety test stickers (see below), followed by one or two letters and one to four numbers. These letters and numbers can be chosen by the vehicle owner or if they prefer, random ones can be allocated by the licensing office. The total quantity of letters and numbers on the plate is never higher than eight. One letter with low numbers are normally reserved for motorcycle use since the plate space of these vehicles is smaller.

Various combinations that could be considered politically unacceptable—mainly due to implications relating to Nazi Germany—are disallowed or otherwise avoided. The district Sächsische Schweiz uses the name of its main town, Pirna, in its code PIR, to avoid the use of SS, the name of the nazi group; similarly SA is also unused. This is why cars for the government and parliament in Saxony-Anhalt are registered with LSA (Land Sachsen Anhalt). In 2004 in Nuremberg, a car owner was refused a number plate beginning N-PD because of the connection to the political party, the NPD.

Example of banned combination ("NS") which was issued accidentally.

Banned combinations include the Nazi abbreviations HJ (Hitlerjugend, Hitler Youth), NS (Nationalsozialismus, National Socialism), SA (Sturmabteilung), SS (Schutzstaffel) and KZ (Konzentrationslager, concentration camp). Some registration offices have overlooked this rule by mistake, however; there are a few cars registered carrying prohibited codes, such as B-SS 12. Some counties also allow these combinations if they are the initials of the owner (e.g., Norbert Schmidt might be able to get XX-NS 1234), but in this case, if the car is sold and re-registered in the same county by the new owner, the number can be changed (otherwise the number stays with the car until it registered in a different area).

Seasonal number plate, registration valid from 1st May to 31st October of each year

However the registration law has changed in 2006 so that in after March 2007 official vehicles will get standard number plates.

The German Federal President's license plate is 0-1, the Chancellor's 0-2, the Foreign Secretary's 0-3. The plate of the President of the Bundestag is an exception: it shows 1-1. This is to show that the Bundestag's President is not part of the government but still ranks higher in importance than the Chancellor. These vehicles are tax-exempt and need not to be insured since the German government acts as insurer.

All content from Kiddle encyclopedia articles (including the article images and facts) can be freely used under Attribution-ShareAlike license, unless stated otherwise. Cite this article:
German car number plates Facts for Kids. Kiddle Encyclopedia.