Goblin Valley State Park is a state park of Utah, in the United States. The park features thousands of hoodoos, referred to locally as goblins, which are formations of mushroom-shaped rock pinnacles, some as tall as several yards (meters). The distinct shapes of these rocks result from an erosion-resistant layer of rock atop relatively softer sandstone. Goblin Valley State Park and Bryce Canyon National Park, also in Utah about 190 miles (310 km) to the southwest, contain some of the largest occurrences of hoodoos in the world.

The park lies within the San Rafael Desert on the southeastern edge of the San Rafael Swell, north of the Henry Mountains. Utah State Route 24 passes about four miles (6.4 km) east of the park. Hanksville lies 12 miles (19 km) to the south. 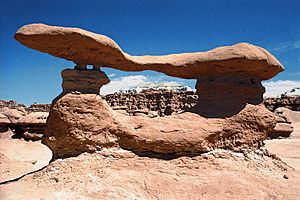 Evidence of Native American cultures, including the Fremont, Paiute, and Ute, is common throughout the San Rafael Swell in the form of pictograph and petroglyph panels. Goblin Valley is noted for several rock art panels, as well as the rock formations. The secluded Goblin Valley was then found by cowboys searching for cattle. Then, in the late 1920s, Arthur Chaffin, later owner/operator of the Hite Ferry, and two companions, were searching for an alternate route between Green River and Caineville. They came to a vantage point about 1 mile (1.6 km) west of Goblin Valley and were awed by what they saw – five buttes and a valley of strange, goblin-shaped rock formations surrounded by a wall of eroded cliffs. In 1949, Chaffin returned to the area he called Mushroom Valley. He spent several days exploring the mysterious valley and photographing its scores of intricately eroded rocks.

Publicity attracted visitors to the valley despite its remoteness. In 1954, it was proposed that Goblin Valley be protected from vandalism. The state of Utah later acquired the property and established Goblin Valley State Reserve. It was officially designated a state park on August 24, 1964. 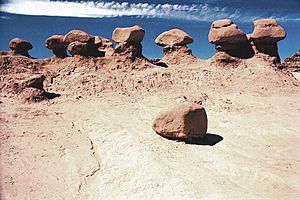 A naturally fallen hoodoo, not the vandalized one

In October 2013, a delicately balanced hoodoo was intentionally knocked over by a Boy Scout leader while two other men watched, one of whom recorded a video that was later uploaded to the Internet. The men claimed that the hoodoo appeared ready to fall, and that it was intentionally knocked over to prevent park visitors from being hurt. The hoodoo formation had existed for many millions of years, having formed out of rock that dated back as far as 165 million years. The average rate of erosion of a hoodoo is approximately 2–4 feet (0.6-1.3 m) every 100 years.

The two leaders were subsequently dismissed from their leadership roles by the Utah National Parks Council which is a local council of the Boy Scouts in Utah. The national Boy Scouts then removed the men from the scouting organization altogether. In January 2014, two of the men—the one who toppled the hoodoo and the cameraman—were arraigned on felony charges of "criminal mischief" and "intentionally damaging, defacing and destroying property." The two men pleaded guilty to lesser charges of criminal mischief and attempted criminal mischief, receiving a sentence of one year probation plus fines and case-related fees.

Vegetation is limited to hardy desert species that can endure blowing sand and hot dry surface conditions. Vegetation and wildlife exist on a limited supply of water in the arid desert environment. Plants have adapted by reducing the size of their leaves to reduce evaporation, with some having a waxy coating on their leaves that reduces water loss. Flora occupying Goblin Valley include Mormon tea (joint fir), Russian thistle, Indian ricegrass, and various cacti. Juniper and pinyon pine grow at slightly higher elevations.

Animals often must travel many miles to find water or else wait for thunderstorms to provide moisture. Most animals in the area are nocturnal, venturing out only in the cooler evenings to hunt and forage for food. Some animals get water from the food they eat and go for weeks without a drink of water. Jack rabbits, scorpions, kangaroo rats, pronghorns, kit foxes, midget faded rattlers, lizards, and coyotes are found within and near the park. 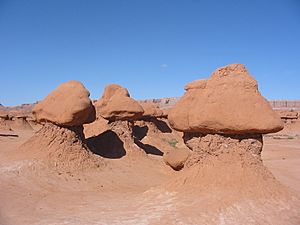 The unusual stone shapes in Goblin Valley result from the weathering of Entrada sandstone. The Entrada consists of debris eroded from former highlands and redeposited on a former tidal flat of alternating layers of sandstone, siltstone, and shale. The rocks show evidence of being near the margins of an ancient sea with the ebb and flow of tides, tidal channels that directed currents back to the sea and coastal sand dunes.

Joint or fracture patterns within the Entrada sandstone beds created initial zones of weakness. The unweathered joints intersected to form sharp edges and corners with greater surface-area-to-volume ratios than the faces. As a result, the edges weathered more quickly, producing the spherical-shaped 'goblins'.

The Entrada sandstone from which the hoodoos developed was deposited in the Jurassic period around 170 million years ago. 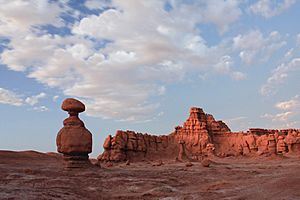 Average daytime highs in the summer average between 90 and 105 °F (32 and 41 °C), though the low humidity, high elevation, and sparse vegetation allow evenings to cool off rapidly to about 50 °F (10 °C). Also, the intermittent summer monsoon arriving from the south can bring intense and localized thunderstorms. The rugged terrain and intense rainfall can lead to devastating flash floods, while the low humidity combined with gusty winds and frequent lightning can spark wildfires. Winters have colder temperatures and occasional snow, with temperatures above freezing most days, but often dropping as low as 10 °F (−12 °C) at night. The average precipitation is less than 8 inches (20 cm).

Goblin Valley was prominently featured in the movie Galaxy Quest as an alien planet. In the movie, the crew of the Protector stops at a rock planet to get a new beryllium sphere, and Captain Nesmith battles a rock monster. Though at the time, the access to Goblin Valley State Park was partly unpaved, the fees paid by the production company were used to upgrade the entire access road to asphalt pavement.

All content from Kiddle encyclopedia articles (including the article images and facts) can be freely used under Attribution-ShareAlike license, unless stated otherwise. Cite this article:
Goblin Valley State Park Facts for Kids. Kiddle Encyclopedia.